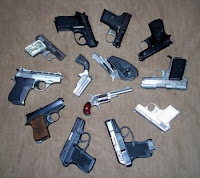 Was there a threat to Sen. Barack Obama in Denver? Apparently not, despite the included facts here in this AP story that seem to contradict the lowered charges.

Three men who authorities initially feared were plotting to assassinate Barack Obama at the Democratic National Convention are facing only gun charges — signaling they never posed a real threat, (and will not be) charged with making threatening statements, conspiracy or other national security-related crimes. One of the men was arrested near Denver with two rifles, ammunition, walkie-talkies and suspected drugs. Federal officials say two other men and a woman were apprehended a few hours later.

Incredibly, the U.S. Attorney made this statement: "We're absolutely confident there is no credible threat to the candidate, the Democratic National Convention, or the people of Colorado."
After all, this was a threat to a traitorous liberal left wing Democrat, right? It gets worse.

One of the men arrested told a TV station in Denver that others involved in the case had made racist statements regarding Obama and had discussed killing Obama on the day of the speech. When asked if he felt there was a plot to kill Obama, Nathan Johnson said, "Looking back at it, I don't want to say yes, but I don't want to say no." Johnson was interviewed while being held in jail on felony drug possession. Three senior FBI officials said it's unclear whether any of them were serious about carrying out threats. A fourth federal official familiar with the investigation said an assassination attempt was unlikely. "The capability and their opportunity and what they had for their weaponry — I don't see that they would have been able to carry it out.” 33-year-old Shawn Robert Adolf had a handcuff key in one hand and a swastika ring on the other when he was arrested, a senior FBI official said.

So “an attempt was unlikely,” “I don’t see how they would have carried it out,” suspect Robert Adolf’s swastika ring and the fact they discussed killing Obama aren’t reasons enough to suspect them of an attempted assassination?

For a government that arrested street bums for terrorist threats, they don’t seem to concerned about a death threat to Barack Obama in Denver? I can see now the justice department isn’t at all politicized.
Posted by John Peterson, Democurmudgeon at 8/26/2008 03:54:00 PM