Republican Agenda: Guns In Harrold School District, GO Texas. Florida, where are You? 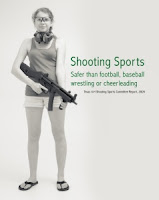 As some readers might know, I have asked God to make Florida and Texas the Republican test tubes of culture in the U.S., and God is answering my prayers with action. Guns in school. According to the Houston Chronicle:

There's one item Houston-area school officials say teachers can leave at home when classes resume later this month: Their handguns. Houston school districts said there's no way they'll follow the lead of a tiny North Texas school system that may be the first in the nation to let employees pack heat at their lone 110-student K-12 campus.

Harrold Superintendent David Thweatt said his school board unanimously passed the policy last October to protect employees and students in the case of an armed intruder or hostage situation."We think we have acted cautiously and wisely," said Thweatt. "Others should be free to govern their school districts as they see fit."

Thweatt said the small community is a 30-minute drive from the sheriff's office, leaving students and teachers without protection. He said the district's lone campus is situated just 500 feet from heavily trafficked U.S. 287, which could make it a target.

Sarah Winkler, vice president for the Texas Association of School Boards said, "This is just appalling. One accident, and I don't know how the school board would live with themselves." She wasn't the only Houston
educator stunned by the policy. "It's a disaster waiting to happen," said Gayle Fallon, president of the Houston Federation of Teachers. "It's right up there with worst ideas in the history of modern education."

"Absurd would be the word I would use," said Don Ryan, president of the Cy-Fair school board. "It's almost like something out of a movie."It's the type of decision, Fallon added, that makes Texas a laughingstock nationally.

That's an understatment. But that's what I love about Texas and Florida. The Republicans need to demonstrate and implement, a fully realized conservative agenda, for the whole world to watch in stunned amazement.