Canada Town Gives Up the Bottle, Water that Is 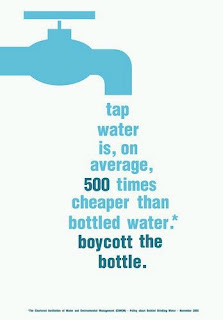 I’ve always hated the idea of bottled water. Hate, hate, hate it. It would seem a small Canadian town has also had enough of this dump idea. The CBC reports:

London, Ont., may become one of the first cities in Canada to stop selling bottled water in municipal buildings. City councillors will vote Monday night on whether or not to ban the sale of bottled water in all city-run buildings, arenas and community centres amid a growing backlash against the product.

Municipal officials have maintained that tap water costs about an eighth of a cent per litre while bottled water can range anywhere from 30 cents to $4 a bottle. Environmentalists have said they are concerned by the amount of energy it takes to transport the bottles, as well as the waste produced by them, particularly when most areas of Canada have safe water supplies.

So how does corporate water bottlers feel about the crackdown? Let’ ask one of them.

Nestlé Waters Canada, the company behind such bottled water brand names as Perrier, Vittel and Montclair, said in an Aug. 11 news release that it was opposed to the ban because it wouldn't do enough to curb waste or reduce the public's preference for bottled water over tap water. “An independent survey conducted in May 2008 by Probe Research Inc., said Gail Cosman, president of Nestlé Waters Canada, indicated that about 60 per cent of bottled water drinkers said they will revert to less healthy alternatives found in plastic beverage containers if bottled water isn't available."

That might be true. But the absurd idea of bottle water is still something that cries out for change. As a product that can be carried in cars for long trips, or slipped into a cooler for a picnic, it's as practical as an ice pack. But in an office, in a bustling city or a refrigerator next to your faucet at home, what the hell are you thinking?
William Rees, sustainability planning professor at the University of British Columbia, reminded us of this one nagging fact, “major bottled water producers actually use municipal water.”
Thank you.
Posted by John Peterson, Democurmudgeon at 8/18/2008 01:22:00 PM