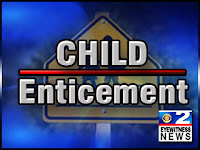 A plea deal is in the works for the former chairman of the Brown County Republican Party, Thirty-eight-year-old Donald Fleischman, who's accused of child enticement..

Prosecutors say police went to Fleischman's home in 2006 looking for two runaways. Police say they found a 16-year-old boy hiding in a closet in his underwear and a T-shirt, and he claimed Fleischman gave him beer and marijuana. The case led the state GOP to decertify the county party.

Surprisingly, this story has received almost no press?

That’s right, the liberal media would never think of going after a Republican for child enticement when it had an opportunity like this to make a point.
Right?
Posted by John Peterson, Democurmudgeon at 8/24/2008 12:39:00 PM