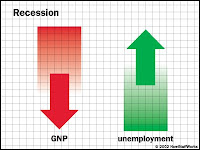 There really isn’t much to add to this, except to say that Republican economics have brought us to this point.
According to Reuters:
The U.S. economy will likely slip into a recession by the end of the year, but the woes in the housing market are close to bottoming out, the top economist for a leading U.S. business group said. "I see possibly a recession by the end of the year, but it will be a relatively short recession and a relatively mild recession," said Martin Regalia, vice president for economic policy at the U.S. Chamber of Commerce.
He also said the government's economic stimulus package helped head off a recession during the second and third quarters of this year, but that a second such package would not be worthwhile.
"Some of the problems in the economy are a little more fundamental than consumption." Regalia said he expects moderate third-quarter growth, at a 1 percent annual rate, and zero or slightly negative growth in the fourth quarter.
Posted by John Peterson, Democurmudgeon at 8/28/2008 04:08:00 PM