Jon Stewart Must Have Been Reading My Mind About News Networks 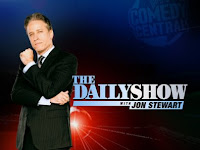 It might be just a comedy show, but Daily Show host Jon Stewart has done more to criticize and “show up” the major news networks in 30 minutes than anyone in recent memory.
The Daily Show makes it look easy to just pull clips from archived news stories and juxtapose them with current clips to show the hypocrisy of politics, something CNN, MSNBC, CBS and ABC forgot to do with this amazing new technology called digital video. Stewart single handedly brought down CNN’s Crossfire after making an appearance and blasting both Paul Begala and Tucker Carlson, calling the show a train wreck.
So you’ve got to love Stewart’s latest left hook.
Howard Kurtz wrote this in an article about recent comments from Jon Stewart:

Jon Stewart ripped the cable news networks Monday as a "brutish, slow-witted beast" and castigated Fox News as "an appendage of the Republican Party." The "Daily Show" host told reporters that Fox's fair-and-balanced slogan is "(expletive) you to people with brains" and that only "Fox News Sunday" host Chris Wallace "saves that network from slapping on a bumper sticker . . . Barack Obama could cure cancer and they'd figure out a way to frame it as an economic disaster." "I'm stunned to see Karl Rove on a news network as an analyst," he said of the Bush White House aide-turned Fox commentator.”