Florida and Michigan Vote Restored! Well Worth the Whining? 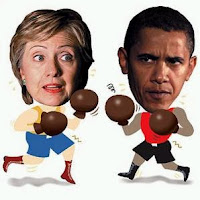 I proudly never got into the Michigan/Florida delegate vote discussion. It was such an incredible waste of time and controled from the powers within. Voters replaced the issues facing this country with an endless stream of whining, on blogs, radio and television, from Democrats sounding oddly similar to the right wing zanies. So what ended up happening?

Washington Post: The Democratic National Committee's Rules and Bylaws Committee today voted to restore full voting rights to the convention delegates from Florida and Michigan, capping a tumultuous year that saw them stripped of all voting rights, then awarded a half a vote each, only to be forgiven on the eve of the party's national convention.

You can argue that without the public protest, these voters might never have been reinstated, but I personally don't buy into that.
The bottom line: after all the talk ... never mind.
Posted by John Peterson, Democurmudgeon at 8/25/2008 08:15:00 AM