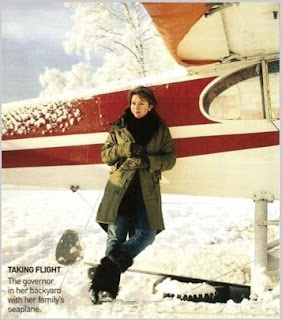 Gov. Sarah Palin is the VP pick for John McCain, and this comment from a McCain campaign advisor should be a reference point in some future discussion.
NY Times: Gov. Sarah Palin of Alaska? As reports circulated on television and cable networks on Friday morning that Senator John McCain might have selected Ms. Palin as his running mate, McCain advisers expressed bewilderment. One adviser said that while Mr. McCain thinks highly of Ms. Palin, who is opposed to abortion rights and would be welcomed by Christian conservatives, her less than two years in office would undercut one of the McCain campaign’s central criticisms of Senator Barack Obama — that he is too inexperienced to be commander-in-chief.

“While it’s a dramatic and interesting choice, it would make the argument he’s making difficult to make,” said one McCain adviser.
Stranger than TV?: The now defunct television series "Commander-In-Chief" starring Geena Davis was premised on a Republican presidential candidate picking Davis as VP, for political purposes only, to win womens votes.
Were there other more qualified women in the Republican Party? Of course. The bigger question: Is McCain saying that women are interchangable? Experience vs no experience is not an issue for McCain, because she's just another pretty face, a political calculation that is a heart beat away from the presidency.
According to Fox News:
Palin’s presence adds youth to a McCain ticket, but it is her gender that could help sway women, especially the “security moms” who helped President Bush win re-election in 2004, to vote GOP."

Of Palin, former White House political svengali Karl Rove said this morning on Fox News Channel: "It would be a clear sign from the McCain campaign that they were going to be making a very strong bid for the women whom they see up for grabs -- both the traditional, swing independent suburbanites and then the Hillary Clinton supporters who remain disillusioned."

In an interview just a month ago, she dissed the job, saying it didn’t seem “productive.” In fact, she said she doesn’t know what the vice president does. “As for that VP talk all the time, I’ll tell you, I still can’t answer that question until somebody answers for me what is it exactly that the VP does every day?"
Palin appeared in the December 2007 issue of Vogue. A picture here is from that "celebrity" spread.

Obama spokesman Bill Burton seized immediately on the experience issue, saying McCain has put "the former mayor of a town of 9,000 with zero foreign policy experience a heartbeat away from the presidency." A Democratic operative unaffiliated with the Obama campaign dismissed Palin as "Geraldine Quayle." Palin herself has been the subject of a probe involving the firing of her former brother in law, a state trooper who was fighting over child custody with Palin’s sister.
According to the Anchorage Daily News, Alaska Public Safety Commissioner Walt Monegan has said he felt pressure from the governor’s office to fire the trooper. A Palin aide reportedly raised the governor’s concerns about the trooper in a phone call with Monegan; Palin has put the aide on leave pending a legislative investigation.
A former high school basketball star and beauty queen, Palin has limited experience in elected office: She served for four years as a member of the Wasilla City Council and four more years as the mayor of Wasilla, and she hasn’t yet completed her second full year as governor of Alaska.
She also successfully took on the oil industry, leading to a tax increase on oil company profits that has swelled the state's treasury. Her husband, Todd, is a North Slope oil worker who competes in the Iron Dog, a 1,900-mile snowmobile race. She did a stint as head of the Alaska Oil and Gas Conservation Commission, currently headed by a former oil industry scientist.

No Quarter USA, an online hub for anti-Obama Hillary supporters, had this comment from Danny in Alaska, a disaffected Hillary Democrat who had pledged not to vote for Obama, on a news post. He called Palin an independent and said a "vote for MCCAIN IS NO LONGER A PROTEST VOTE! I want bumper stickers."

Two senior Republican officials close to Mitt Romney and Tim Pawlenty said they had both been rudely strung along and now "feel manipulated.""They now know that they were used as decoys, well after McCain had decided not to pick them," one Republican involved in the process said.

Even some former Clinton supporters said Palin would not automatically draw disenchanted women voters -- and would face fierce pushback from the Obama campaign over her conservative social views.

"I know Hillary Clinton, and Sarah Palin is no Hillary Clinton," Debbie Wasserman Schultz said in a phone interview with NBC.
Posted by John Peterson, Democurmudgeon at 8/29/2008 10:34:00 AM