Trump is big on repeating hyperbolic words and terms like "believe me," "great again," "really bad," "liar," "it's going to be huge," "tremendous," "...has zero credibility," "out of control," "there's something going on," "he doesn't get it," and on and on. 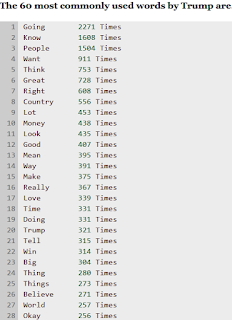 Here's an example of the same words mixed up and repeated:

...a habit of punctuating each argument with short, declarative sentences. And then he often repeats them.

The Trumpian Age of Pointless Ranting: I'm beginning to think the wealthy have their own Trumpian language, that assumes us little people are too dumb to understand.

Like Home Depot Co-Founder Bernie Marcus, whose Trumpian rant against Massachusetts Sen. Elizabeth Warren did nothing to explain why "she doesn't have a clue," and that "they don't know what the hell they're talking about, it's as simple as that."

Trumps repetition probably has a calming effect on his devoted basket of deplorables who love keeping it simple...because the world should be as simple as Trump makes it all seem: 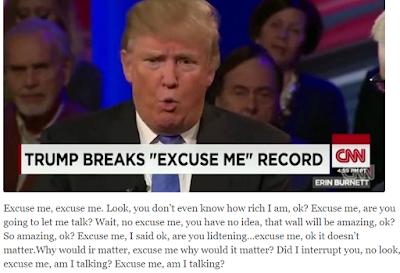 “Let me tell you” & “Believe me” & “Trust me” Famous phrases said by all con artists meaning…”I’m lying through my teeth and my…wherever.”
“VERY” & “REALLY” Dear God, I am SICK of the words “very” and “really.”
“YUGE”
“AMAZING” This is to cover up the fact that he’s lying so much he can’t even fake these so called “results” that he’s pretending to promise that he’s never going to deliver anyway.
“UNBELIEVABLE”
“HATERS AND LOSERS” The obvious…people who don’t like Trump…the majority of the country…the thinking people, non-racist, non-sexist, non-xenophobic public who loathe him.
“NO ONE REALLY KNOWS” This is what Trump says when all proof has been provided proving something is true but Trump doesn’t have any intention of accepting it.
“I don’t know, but that is what people are telling me.”
Posted by John Peterson, Democurmudgeon at 10/29/2016 12:35:00 PM