The Telegraph just caught Trump in another couple of lies; that money doesn't influence Trump, and
Trump lied about not getting illegal international donations like Clinton. As Sgt. Schultz would say... 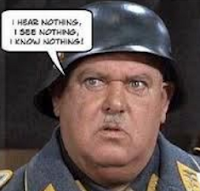 As Trump would say, "big, big story. Unbelievable." The jaw dropping video is killer. The Telegraph:

Taking to a podium in Colorado last week, Donald Trump resumed a line of attack he had long used against his opponent: “Her international donors control her every move”.

Yet fundraisers supporting his bid for the White House were in the process of finalizing the details of a $2 million donation from a Chinese benefactor seeking unspecified future “influence” under a Trump presidency. Under US law it is illegal for a foreign national to make any contribution in connection with an election.

An undercover reporter telephoned Eric Beach, the co-chairman of the pro-Trump Great America PAC, which has the backing of Rudy Giuliani, one of Mr Trump’s most senior advisers, as well as the billionaire's son Eric, to convey his fictitious Chinese client’s desire to make such a donation … his approach did not appear unwelcome … “but he’s not a US national.”

Mr Beach however suggested involving a 501(c)(4) – a tax-exempt “social welfare organization” – which he described as a “non-disclose entity” through which the client could make a contribution for a “specific purpose”.

In return, undercover reporters purporting to represent the fictitious donor were assured that he would obtain “influence” if Mr Trump made it to the White House. Last week Eric Beach, the PAC’s co-chairman, confirmed to the reporters at an event in Las Vegas that their client's support would be "remembered" if Mr Trump became president.

The reporter then received an email from Jesse Benton, a senior figure at the PAC until being convicted in May in connection with buying a senator’s endorsement on a prior campaign. He said he was a “consultant” and that Mr Beach had not wanted a “paper trail” of contact. He and the PAC later denied that he had worked for it at all since May.

He suggested that the $2 million paid to his firm could be billed simply as “a large retainer” for consulting work. He then sent a $2 million invoice, for the sake of “appearances”, for his services providing “analysis of the American political and business landscape”. And the fictitious Chinese benefactor’s generosity would not go unrewarded should the donor a require a line of communication to Mr Trump if he became president.

“We can have that whispered into Mr Trump’s ear whenever your client feels it’s appropriate,” he said. After a telephone conversation with Mr Beach, Mr Benton said that the PAC wished to invite the reporters to a party the group was hosting in Vegas on October 19, the night of the final presidential debate.

Mr Benton denied any “unethical” behaviour and said he was not “an agent of Great America PAC”, while Dan Backer, counsel to the PAC said Mr Benton “has not had a role with the PAC since May and does not speak for it.”

This was a creation of the ridiculous Citizens United decision. The Intercept:


Trump Super PAC Sting Shows How Citizens United Opened Door to Foreign Money: Pre-Citizens United, this would have been pointless, because the U.S. campaign finance system was based on legally-limited contributions from identifiable, individual American citizens. Under those circumstances, Benton would have had to find several hundred illegal “straw donors” to the Trump campaign.

Thanks to Citizens United, however, a corporation like Titan Strategies can make unlimited contributions from its treasury to other organizations trying to elect Trump, as long as those organizations are theoretically “independent” from the Trump campaign.

It’s true that, even post-Citizens United, Benton’s proposed actions all would appear to be brazenly illegal. The difference now is they can be easily executed and almost certainly would escape detection.

Great America’s lawyer Dan Backer emphatically denied to The Telegraph that Super PAC co-chair Beach had asked Benton to act on his behalf.