Crooked Mayors City Clerk tried to do away with early voting site because "students lean more toward the Democrats."

Rigged election indeed. Looks like Trump offered up a little insider "projection" of what his own party was up to all the time. WSJ:


Green Bay's city clerk asked state officials if she could rebuff a request to put an early voting site on the UW-Green Bay campus because, in her words, "students lean more toward the Democrats," newly released emails show ... first reported Tuesday by The Nation Magazine, was from Green Bay City Clerk Kris Teske, an appointee of the city's mayor, Jim Schmitt. He reportedly has praised Republican Gov. Scott Walker and was considered for a post in Walker's cabinet, and records show he contributed to the campaigns of Republican state representatives. 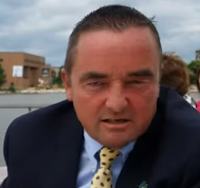 Oh, Schmitt is much worse than that. Can you say election fraud....

Schmitt issued a statement Wednesday in which he acknowledges mistakes in how his campaign finances were handled. Each count carries a maximum 9 months imprisonment and $10,000 fine upon conviction. Schmitt is accused of accepting contributions over acceptable limits and wrongfully attributing some to relatives. The mayor is also accused of failing to accurately record and verify financial campaign data.

Republican arrogance has once again exposed for everyone to see in Wisconsin their intention to actually suppress voting by their opposition party. This might be exhibit A in a case before the Supreme Court someday:


The report is likely to stoke the controversy surrounding early voting in Wisconsin. A federal judge in July overturned ... restrictions on early voting. It also may fuel charges from Wisconsin Democrats that Walker and other state Republicans have tried to make it more difficult to vote, especially among demographic groups that tend to support Democrats. "It is troubling to see that... trickle down from our state politics to a nonpartisan office," state Rep. Eric Genrich, D-Green Bay, told the Wisconsin State Journal.

Of course con man and crook Mayor Schmitt denied everything. You won't believe this one:


Schmitt's office responded Tuesday by saying "media allegations that the City Clerk is attempting to curtail Democratic voting for this election are completely false." The release says an email from Teske to the state Elections Commission, which was the basis for the reports, simply shows her asking how to interpret a state law that requires impartiality in deciding where polling places are located. Schmitt's chief of staff, Celestine Jeffreys, told the Wisconsin State Journal that Teske felt it was important to consider voting access for all groups in Green Bay, not just college students. "Kris' concern is for everyone," Jeffreys said.

Trolls, tell me you believe what you just read.


She then asks if it's possible to justify rejecting the request due to a state law barring voting sites from being located where they give an advantage to any political party. "I have heard it said that students lean more toward the democrats," Teske writes in the email.

Nathan Judnic, legal counsel for the commission, responded to Teske with an email saying she and city officials "decide what is feasible and serves the needs of the city and its voters. As far as stating that one political party may be advantaged more because of a particular location, I might be hesitant to make that argument unless you could point to something other than 'I've heard that students lean more democratic." Judnic also noted that the city has an Election Day voting location on the campus ... "There is no 'political advantage' then, I’m not sure what the difference is for (early) voting at that same location?"

Student groups from across the political spectrum, including Republicans and Libertarians, supported the move.