Trumps ignorance and mocking of election something Justice David Souter warned us about 4 years ago.

It's actually funny to see the tea party low information-hard core-conservatives base fall all over themselves to support a snarky arrogant big talking East Coast New Yorker. Think about it.

Keeping Americans in suspense over "will he or won't he" accept the election results is the most juvenile dumb anti-American comment by this narcissistic sociopath: 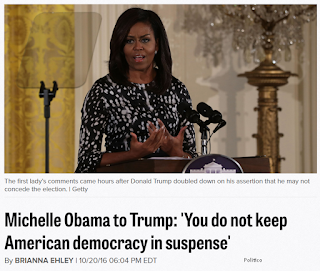 This is so where Republicans are today, mocking the representative democracy they claim they want to defend with a revolution and guns. To top it all off, Trump even felt like getting a little press with this sarcastic "joke:"

Rachel Maddow came across this amazing clip of former Justice David Souter warning us that a guy like Trump was his biggest worry. Unsettling and incredibly accurate: