Republicans are not only running on a phony list of scandals and imagined lawlessness by the Democrats and Hillary Clinton, they're also just as full-of-it about their criticisms of the presidential and vice presidential debates. It's a world where nothing is real anymore.

This was the funniest misstep yet by Wisconsin's embarrassing chairman of the RNC, Reince Priebus:

One pundit, after hearing the news, said that RNC declaration took away some of the anticipated excitement out of the VP debate. Even with the awesome ability to time travel, Republicans still can't stop stumbling around:


A blog posted on the party's website, which was presumably set to publish once the debate was over, declared that "the consensus was clear after the dust settled, Mike Pence was the clear winner of the debate." It went on to say that the Indiana governor "made the most of his opportunity to debate Hillary's VP pick Tim Kaine." Pence, the blog declared confidently, "perfectly shared Trump’s vision to make America great again and that message is resonating with Americans all across the country." 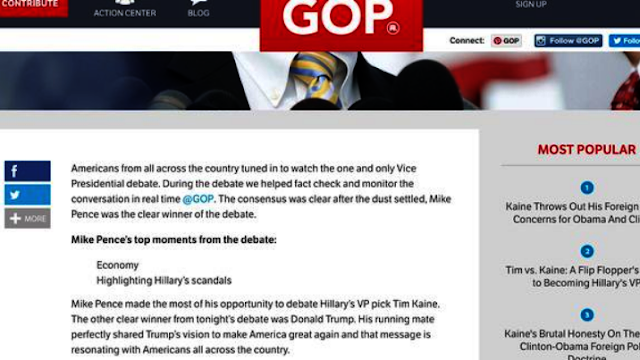