Sheriff David Clarke is so popular with conservatives in Milwaukee County that he intentionally games the system by running as a Democrat. It's an amazing scheme that twists the electoral process into a pretzel, and it's all legal-like.

Clarke's taxpayer supported career is based on a deception that works. Clarke's authoritarian style of control has allowed him to take center stage nationally by all the major conservative media outlets.

Remember when he pushed self defense over relying on slow 911 responses? Now he's decided to incite a government overthrow if we don't do what Republicans want us to do, like electing an authoritarian narcissist like Trump. Sounds like jail time for Clarke.


Title 18 U.S. Code § 2385: Whoever knowingly or willfully advocates, abets, advises, or teaches the duty, necessity, desirability, or propriety of overthrowing or destroying the government of the United States ... Shall be fined under this title or imprisoned not more than twenty years, or both, and shall be ineligible for employment by the United States or any department or agency thereof, for the five years next following his conviction.

Time to storm the castle with pitchforks and torches. No, really, he's the county sheriff...for now. JS: 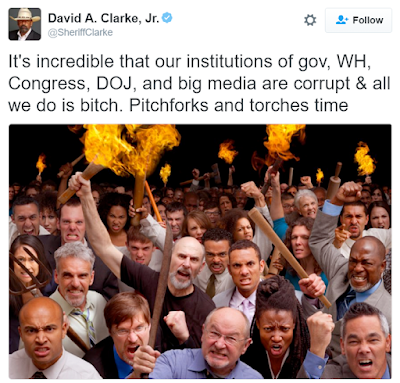 As Sheriff Clarke’s tweet shows, the rigged election rhetoric could also have real consequences should Trump lose the election.

MSNBC featured a few clips of Trumpian losers threatening an armed revolution is they don't get their way, along with John Dean's opinion on right wing authoritarianism:


Think Progress: At a recent rally in Cincinnati, Trump supporters told a reporter for the Boston Globe that they intended to head to local polling stations and watch for illegal immigrants, and that they suspected Hillary Clinton’s campaign was stuffing ballot boxes. They also floated ideas of armed rebellion and assassination.

“If she’s in office, I hope we can start a coup. She should be in prison or shot. That’s how I feel about it,” Dan Bowman, a 50-year-old contractor, told the reporters of Clinton. “We’re going to have a revolution and take them out of office if that’s what it takes. There’s going to be a lot of bloodshed. But that’s what it’s going to take… I would do whatever I can for my country.”

I'm pretty sure this is exactly what the Founding Fathers envisioned.
Posted by John Peterson, Democurmudgeon at 10/16/2016 11:36:00 PM