Giuliani the Face and Voice of Trump supporters everywhere!

The unshakable Republican base for Trump should be a wake-up call for Democrats still scratching their heads over Scott Walker's recall win and a majority of Republicans in the legislature.

Nothing Republicans can do will change the minds of their voters, no matter how bad things get or how bad their policies fail. After all, Democrats will destroy the country and shred the Constitution, don'tcha know. New Republic:

They are entertaining the anti-democratic fantasy of sweeping their Trump enablement out of memory and grabbing the country’s levers of power in an unwelcome, Trumpian fashion.

In rescinding his endorsement, Idaho Senator Mike Crapo said, “I urge Donald Trump to step aside and allow … Mike Pence who can defeat Hillary Clinton.”

Republican officials and strategists (want) to overturn the results of the Republican primary, and the votes of hundreds of thousands of citizens who have cast ballots for Trump already. Republicans want nothing less than to replace the election the country’s been enduring for months with an entirely new one, and without wasting a single moment.

Despite Trump's many outrageous dis-qualifiers, using his position and power to sexually assault women should have been a game changer...nope. Like my conservative friend keeps telling me, this was just "citizen" Trump, not the political candidate: 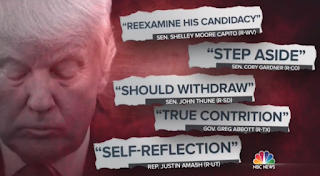 Exclusive poll: GOP voters want the party to stand by Trump: According to a new POLITICO/Morning Consult poll, GOP voters, 74 percent surveyed on Saturday, said party officials should continue to support Trump. Only 13 percent think the party shouldn’t back him. 10 percent of Republicans said the video gave them a positive feeling. 8 percent said it makes them feel more favorably toward Trump. And 25 percent GOP voters could be prepared to punish Republicans who bail on Trump.

Jake Tapper's interview with Rudy Giuliani shows how Trump supporters rationalize and accept whatever it is their candidates do, no matter how illegal or repugnant. Giuliani claims Trump isn't the same man he was a few years ago, so let it go. Can't the same be said about Bill Clinton? Just asking:


JAKE TAPPER (HOST): Right, but I guess the question is he's talking about actions that are sexual assault. And he was 59 or 60 years old when he said it. This wasn't something that he said when he was 18 years old. He is talking about a feeling of entitlement because he's a star. He can go up to women and grab them by the vagina and it's OK, he won't get in trouble for it. It's really offensive on just a basic human level. Who did he do that to?

RUDY GIULIANI: Yes. Well, first of all, I don't know that he did it to anyone. This is talk. Gosh all mighty, he who hasn't sin throw the first stone here. I know some of these people dropping their support --


Giuliani is the spokesperson for the Trump supporters polled above, where it's anything goes against your enemy. They want to "shake things up" and attack "political correctness," an open invitation for racism and bigotry.

You have to wonder if Trump voters were ever willing to commit this same act of irresponsibility with their own home and the well being of their own families. Didn't think so.

Chuck Todd got to take his turn at Rudy Giuliani today on NBC. Like CNN’s Jake Tapper did earlier this morning, he grilled Donald Trump‘s advisor over the candidate’s lewd recordings from 2005 ... so Todd played a few more of those words. Specifically, he played some 2008 clips of Trump saying lewd things to Howard Stern.

Remember when Trump threatened the media with lawsuits over bad press? Sadly, it looks like NBC took that very seriously at the expense of their credibility and the public's right to know: 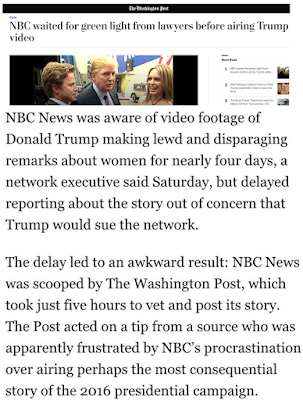