Paul Ryan is a master of con man and wonkish defender against the "dark" progressive ugliness ravaging our country and destroying our rugged individualism. And why wouldn't we believe him... 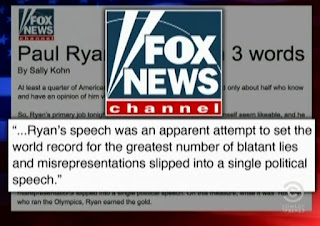 In what I would call unrelenting projection, Ryan presented an over the top mischaracterization of liberal progressivism; a dystopian one party hell under Hillary Clinton.  It's revealing that the only way to sell their failed free market agenda is to juxtapose it to a Mordor-like liberal hell-scape.


Ryan: "I know this election has taken a dark, some very dark turns ... In the America they want … government is taken away from the people, and we are ruled by our betters, by a cold and unfeeling bureaucracy that replaces original thinking. It is a place where the government twists the law — and the Constitution itself — to suit its purposes. A place where liberty is always under assault, where passion — the very stuff of life — is extinguished. That is the America Hillary Clinton wants. If given control of Washington — if given control of Congress — it is the kind of America she will stop at nothing to have."


1. Hundreds of thousands of protesters had their voice "taken away" from Walker's government.

4. And "passion?" Republicans look down on passion as "emotional." It must be extinguished.

Here's the slightly shortened Ryan speech describing a fictionalized liberal progressivism I'm totally unfamiliar with. My god, they can't even get that right:


It's fun to be lectured by an arrogant, paternalistic, right wing authoritarian socialist demagogue who's never looked in a mirror. I mean seriously, what American would "give up our ties of responsibility to one another" to government? Who thinks like this?

“[America is] a place where liberty is always under assault. That is the America Hillary Clinton wants. Liberal progressivism … demands conformity and sameness. It traps people. The left intends to make it a reality. An arrogant, condescending and paternalistic reality. You see when Hillary Clinton says we are ‘stronger together,’ what she means is we are stronger if we are all subject to the state. What she means is we are stronger if we give up our ties of responsibility to one another and hand all of that over to government. A gloom and grayness to things … (Clinton) will stop at nothing to have.”

There was one unsettling preoccupation: The cult like belief in conservatism borders on religious zealotry, where "victimized" Madison students in the video below feel the need to proselytize wayward progressive students. Three insecure young Republicans had to ask Ryan how to "spread their message on campuses," like their own personal identities depended on it:

Like Ryan, Trump just piles on what is in reality, a pretty steady job filled economic recovery:


Alternet: Paul Krugman writes “(Donald Trump’s) his vision of America — clearly derived largely from white supremacist and neo-Nazi sources — crime is running wild, inner cities are war zones, and hordes of violent immigrants are pouring across our open border. In reality, murder is at a historic low, we’re seeing a major urban revival and net immigration from Mexico is negative. But I’m only saying that because I’m part of the conspiracy.  A recent Gallop poll that found "80 percent of Americans are satisfied with their standard of living, up from 73 percent in 2008, and that 55 percent consider themselves to be “thriving,” up from 49 percent in 2008.  Things are not perfect but unemployment is low, incomes are finally rising, and many more people have insurance thanks to Obamacare.”

And because Trump reminds of a despotic dictator, I thought back on how the "Shock Doctrine" worked best in dictatorial countries controlled by a strong man leader.

THE SHOCK DOCTRINE by Naomi Klein: The narrative begins with University of Chicago economist Milton Friedman and what Klein calls his "free market fundamentalism," which called for privatizing everything, including the public and nonprofit sectors, requiring that the mixed economies prevalent in most countries be quickly and completely superseded, overwhelmed and demolished. In Chile, under Gen. Augusto Pinochet in the 1970s, Friedman and his "Chicago boys" got their first client and began what would come to be called "shock therapy," imposed by international institutions, that made radical privatization a condition of loans and aid … successive instances of shock therapy (took place) n Argentina, Uruguay, Bolivia, Poland, Russia, South Africa and China.

Political Heat's Chris Walker had a few things to say about this as well.