Trump experienced at being legally untouchable, while his Breitbart campaign of lies becomes the norm.

It all seems kinda bizarre ; Trump campaign heavy hitters were connectioned to Russia; Wikileaks only hacked the Democrats and Clinton campaign with leaks timed right up through the election; Trump attacked Clinton for supposed corruption and deleted emails...wait a minute, Trump has a corruption and email problem too.

But with lawsuits and legal maneuvers, Trump knows how to game the system forever, a system his voters want to shake up and basically destroy anyway.

Newsweek wrote about this, essentially Trump's greatest strength. This is what the media doesn't have time to cover, and why the election is so close. It's not Clinton whose getting away with corruption, it's Trump.

The danger is have a president who is really great at knowing how to break the law and get away with it legally. "Believe me," It pays to be the bully:


Over the course of decades, Donald Trump’s companies have systematically destroyed or hidden thousands of emails, digital records and paper documents demanded in official proceedings, often in defiance of court orders. These tactics—exposed by a Newsweek review of thousands of pages of court filings, judicial orders and affidavits from an array of court cases—have enraged judges, prosecutors, opposing lawyers and the many ordinary citizens entangled in litigation with Trump. In each instance, Trump and entities he controlled also erected numerous hurdles that made lawsuits drag on for years, forcing courtroom opponents to spend huge sums of money in legal fees as they struggled—sometimes in vain—to obtain records.

This behavior is of particular import given Trump’s frequent condemnations of Hillary Clinton, Trump’s use of deception and untruthful affidavits, as well as the hiding or improper destruction of documents, dates back to at least 1973, when the Republican nominee, his father and their real estate company battled the federal government over civil charges that they refused to rent apartments to African-Americans. The Trump strategy was simple: deny, impede and delay, while destroying documents the court had ordered them to hand over...

...This review of Trump’s many decades of abusing the judicial system, ignoring judges, disregarding rules, destroying documents and lying about it is not simply a sordid history lesson. Rather, it helps explain his behavior since he declared his candidacy. He promised to turn over his tax returns and his health records—just as he promised to comply with document discovery requirements in so many lawsuits—then reneged. As a result, he has left a sparse evidentiary trail that can be used to assess his wealth, his qualifications for the presidency or even his fitness. Should voters choose him to be the next U.S. president, he will enter the Oval Office as a mystery, a man who has repeatedly flouted the rules. He has solemnly told the country to trust him while refusing to produce any records to prove whether he speaks the truth or has utter contempt for it.

Just One Day of Trump Lies: It's weird how Trump voters prefer direct, "tell it like it is" lies, that support their general paranoid world view. But when you leave what "appears" to be Clinton lies up to their imaginations...?

The Toronto Star took a look at just one days worth of lies, which would be a partial list out of a weeks worth of visits around the U.S.. 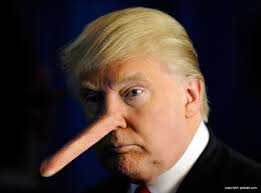 1. Falsely said, “We’re winning many national polls.” (Repeated at both rallies later in the day. At the time he spoke in Las Vegas, Trump was only leading in the Los Angeles Times tracking poll that has been consistently most favourable to him. He was tied in one other poll, by Rasmussen, and trailing in all the others.)

3. Falsely said of Clinton’s email deletion, “Did anybody ever hear of bleaching? You know why? It’s such an expensive process.” (Trump uses “bleaching” to refer to Clinton aides’ use of a software program called BleachBit, which is free.)

4. Falsely said, “It was publicly reported that sources close to Hillary Clinton said, and she actually I think said it to the papers, that she was thinking of reappointing Attorney General Lynch. She was thinking. She said it. I mean, it was a statement she made . . . she said it publicly, I believe.” (The first part is true — a Times story in July said that “Democrats close to Mrs. Clinton say she may decide to retain Ms. Lynch” — but the second part is not. Clinton did not say this publicly; it was not a “statement she made.”)

5. Falsely said of Iran, “Their $150 billion payment started the next day.” (Said at another rally later in the day: “We can’t continue to make deals like that horrible Iran deal where we give them $150 billion back.” The nuclear deal with Iran did not involve a $150 billion payment; rather, a smaller amount of Iranian assets were unfrozen. The Treasury Department told Congress in 2015 that total Iranian assets were estimated at $100 billion to $125 billion; it put the “usable liquid assets” at around $50 billion. Secretary of State John Kerry said Iran would get about $55 billion.)

6. Falsely said of Frank Sinatra, “When he originally heard and sang for the first ‘My Way’ . . . he didn’t like it. But then he sang it a couple times and then it went to No. 1 and all of a sudden he loved it.” (Sinatra did not actually come to like the song. His daughter Tina said in 2000, “He always thought that song was self-serving and self-indulgent. He didn’t like it. That song stuck and he couldn’t get it off his shoe.”)

8. Falsely said of the illegal immigrant who killed Nevada teenager Rene Angulo, “Everybody said we must get him out of our country. We must incarcerate him. This guy was brutal . . . He had a record as long as your arm, but the Obama administration didn’t want to put him out.” (There is no evidence that the Obama administration made any decision about this man. He had been deported twice in the past.)

10. Falsely said, “We owe China $1.5 trillion.” (This is an exaggeration; it is closer to $1.1 trillion. “The biggest foreign holder of U.S. government debt had $1.19 trillion in bonds, notes and bills in August, down $33.7 billion from the prior month, the biggest drop since 2013,” Bloomberg reported in October.)

11. Falsely said of Hillary Clinton’s handling of convicted illegal immigrants whose home countries would not accept their return: “She would always let them come back (to America). She didn’t want to make waves.” (These immigrants were not actually sent to their refusing home countries; they were simply released from prison in the U.S. This was not Clinton’s personal choice: a 2001 Supreme Court decision requires their eventual release if they can’t be deported.)


13. Falsely said of Florida’s early voting, “They’ve never had lines before (the Trump campaign came along).” (Florida has indeed had long lines for early voting in past elections. One 2012 headline read, “Florida Early Voting Fiasco: Voters Wait For Hours At Polls As Rick Scott Refuses To Budge.”)

14. Falsely said Clinton wants “virtually unlimited immigration from the most dangerous regions in the world.” (Clinton is calling for no such thing.)

15. Falsely said, “She also wants to raise your taxes through the roof.” (This would only be a fair argument if he was speaking to an audience of rich people. Clinton is only raising taxes on the highest earners. The Tax Policy Center says most residents below the top 1 per cent will receive minor tax cuts under her plan, and even most of the highest earners will not see a doubling.)

16. Falsely said, “Hillary wants to raise your taxes to almost 50 per cent.” (Again, this is only close to true for rich people. Under Clinton’s plan, only people making more than $5 million a year would face a top marginal rate of, effectively, 44 per cent. People below the top 1 per cent will see only minor changes.)

17. Falsely said, “We take care, in many cases, of illegal immigrants more so than we take care of our great veterans.” (Every news outlet that has examined this claim has found it ridiculous.)

18. Falsely said, “Hillary Clinton said the veterans’ administration is doing just fine.” (This is an exaggeration. Clinton said the problems at the VA had “not been as widespread as it has been made out to be,” but she did not say it was “fine.” She went on in the same interview to acknowledge problems and suggest how to improve them.)

19. Falsely said under Clinton’s plan, “We could have 600 million people pour into our country.” (While anything “could” happen, there is no basis for this huge number, nearly double the current U.S. population.)

21. “Hillary Clinton on the other hand is going to raise your taxes by almost 50 per cent.” (There is no basis for this claim.)

22. Falsely said, “Think of this: we’re the highest-taxed nation in the world.” (The U.S. does not even have the highest corporate taxes, though it is near the top. Where all taxes are concerned, the U.S. is below the average for OECD industrialized nations.)

23. Falsely said, “We’ve received the first-ever endorsement from ICE.” (ICE, a government agency called Immigration and Customs Enforcement, does not endorse candidates. Trump received an endorsement from a union of ICE employees, not the agency itself.)

24. “You could have 650 million people pour in and we do nothing . . . that’s what could happen. You could triple the size of our country in one week.” (While anything “could” happen, there is no basis for this huge number, nearly double the current U.S. population.)

25. Falsely said, “The Cubans gave me their most coveted award, and it was a great honour.” (Trump received an endorsement last week from the Cuban-American Bay of Pigs Veterans Association in Miami. It was not an award, nor from “the Cubans” or even the broader Cuban-American community more broadly.)

26. Falsely said of the U.S. troop withdrawal from Iraq, “It left a vacuum, and from that vacuum, ISIS formed.” (The complete troop withdrawal happened in 2011. The group has roots as far back as 1999, and it was already using the name Islamic State by 2006.)


27. Falsely said, “Wow, Twitter, Google and Facebook are burying the FBI criminal investigation of Clinton.” (There is no good evidence for this claim.)