The Trump "chains off" eruption, resulting in a shower of volcanic political debris, is again almost impossible to keep up with.

#1: Paid Sexual Assault Victim: A political action committee founded by a prominent Trump ally, Roger Stone, paid an anti-Clinton sexual assault victim $2,500 to appear with the GOP candidate before the debate this past Sunday, according to the Associated Press.

Clinton On Benghazi: "The attack was almost certainly preventable," Trump read. "In other words he (Blumenthal) is admitting that they could have done something about Benghazi. This just came out, a little while ago." For Newsweek reporter Kurt Eichenwald, the words Trump read sounded familiar. It turns out they were taken from an article he wrote,

...maybe the country needs Trump to show 'authoritarian power,' and dismissing concerns over an audiotape leaked last week that showed Trump describing how he forces himself upon women. LePage said on Maine radio station WVOM; "Sometimes, I wonder that our Constitution is not only broken, but we need a Donald Trump to show some authoritarian power in our country and bring back the rule of law because we've had eight years of a president, he's an autocrat, he just does it on his own, he ignores Congress and every single day, we're slipping every single day into anarchy." 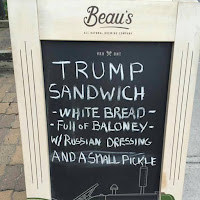 #5: Glass Houses? Trump was accused of destroying email evidence in lawsuit 10 years ago: In 2006, when a judge ordered Donald Trump's casino operation to hand over several years' worth of emails, the answer surprised him: The Trump Organization routinely erased emails and had no records from 1996 to 2001. The defendants in a case that Trump brought said this amounted to destruction of evidence, a charge never resolved.


#6: New polling by @GSG for the DCCC shows "Deplorables" are just that: