Thanks to Citizens United, political movies are now fair game at election time: 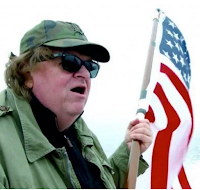 “Michael Moore in Trumpland:" "See the film Ohio Republicans tried to shut down,” reads a description of the film on the IFC Center’s website. "Oscar-winner Michael Moore dives right into hostile territory with his daring and hilarious one-man show, deep in the heart of TrumpLand in the weeks before the 2016 election.” Moore tweeted a tease to “finishing touches on an ‘October Surprise’ for this election.” Earlier this month, he compared Trump to a "human Molotov cocktail" voters can throw into a political system that has left them behind.

The rank smell heading your way is described below:


Hillary's America: Filmmaker Dinesh D’Souza reveals the sordid truth about Hillary and the secret history of the Democratic Party. This eye-opening film sheds light on the Democrats’ transition from pro-slavery to pro-enslavement; how Hillary Clinton’s political mentor was, literally, a cold-blooded gangster; and how the Clintons and other Democrats see foreign policy not in terms of national interest, but in terms of personal profit. Hillary’s America uncovers how their plan is to simply steal America.

Just in time for Halloween, be afraid with this short clip: