"Stand with Walker" troglodytes worked themselves into a fevered frenzy opposing high speed rail plans linking Chicago to Milwaukee to Madison and then Minneapolis.

Scott Walker turned Republicans against the idea by deceptively blaming the $7.5 million a year maintenance costs taxpayers would have to pick up over a 25 years period. That was an lie of course, because federal aid would have covered as much as 90% of that amount, just as it does for the Milwaukee to Chicago Hiawatha train service.

Now, Wisconsin taxpayers are going to pay for it. Ironically Walker will have to seek out federal funding help, a problem we wouldn't have if Walker had taken the high speed rail deal 6 years ago.

(The state would lose) $82 million for upgrades to the current Milwaukee-to-Chicago train service that would have been covered as part of the rail funding.

Today, no money saved: The Journal Sentinel story below didn't even mention the high speed rail fiasco, or the projected development along the route: 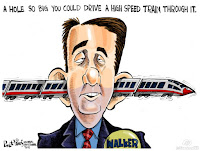 The project, which depends on securing federal funding in addition to state and private matching funds, would cost approximately $150 million to $200 million.

After nearly four years of studying and talking about increasing passenger rail service between Chicago and Milwaukee ... public hearings ... where citizens can weigh in on the proposal to boost the number of daily round trips on Amtrak's Hiawatha line from seven to 10, new railroad infrastructure, such as main tracks, side tracks and train signals, needed to support the additional trips.

Ridership nearly doubled ... has the largest number of riders of any Amtrak service outside the East and West coasts, according to the Wisconsin Department of Transporation project website. It is also expected to reduce highway congestion between the two cities.