Republicans are big on raising the retirement age for both Social Security and Medicare. It makes privatizing them with a one size fits all subsidy seem like a good idea. It isn't.

And now their plan, based on people living longer, is taking a hit because of their own draconian policies. Republicans have again hitched their wagon to a shifting standard that no longer supports their talking point, thanks to the wealth gap: 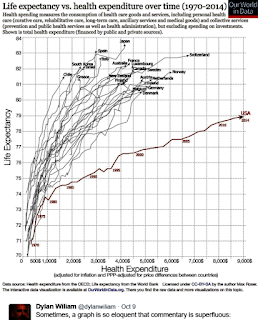 The latest, best guesses for U.S. lifespans come from a study (PDF) released this month by the Society of Actuaries: The average 65-year-old American man should die a few months short of his 86th birthday, while the average 65-year-old woman gets an additional two years, barely missing age 88.

Over the past several years, the health of Americans has deteriorated—particularly that of middle-aged non-Hispanic whites. Among the culprits are drug overdoses, suicide, alcohol poisoning, and liver disease, according to a Princeton University study issued in December. The Society of Actuaries’ website offers a longevity calculator that takes both your age and health into account.

Still, the bottom line is that longevity’s rise has slowed way down. If you’re trying to figure out how long you’re likely to live, estimates of “average” life expectancy may not be that helpful. That’s getting worse in an age of rising inequality.

And for those who can afford the best health care the U.S. has to offer?

Great medical care and good fortune may add decades to the lives of the wealthy and educated, while much of the rest of America is left behind.Take a 40-year-old man in the top 1 percent. He can expect to live, on average, to 87. His counterpart in the bottom 1 percent would be expected to perish, on average, before his 73rd birthday. For women, who live longer on average, the gap was narrower, but still substantial. Life expectancy for the richest women is almost 89, about 10 years longer than the poorest.

NOTE: I'm not sure if the following was included the statistics above, but medical errors may have played a part in life expectancy rates. The Republican idea that we need to ignore and lessen the penalties for medical errors to bring down the cost of health care is not just upside down and illogical, but it'll just make the problem worse: