Wisconsin Conservative Activist Justice Roggensack Says Recusal is Nothing More than Political Correctness. It's Time for a Re-Call Election. 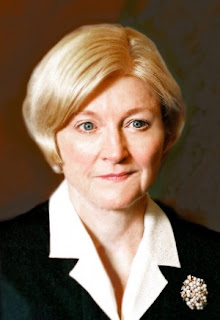 When a state supreme court justice thinks that recusal, due to the appearance of influence, is nothing more than "political correctness" it's time for removal. Like Alice Through the Looking Glass, Roggensack's world view is filled with Mad Hatter logic and Humpty Dumpty pontifications. In a recent editorial comment, she states:

Some articles in the media have implied that past campaign contributions or independent advertisements caused the justices to vote in favor of that rule.

It's down the rabbit hole, folks. Roggensack can't be this naïve, ignoring historical judicial corruption:

If a candidate for judicial office were to accept a campaign contribution in exchange for the promise to vote one way or another in a case, that is not a lawful contribution.

That's right, Roggensack claims any judicial candidate that openly admits to being bought off should be arrested. What a revelation.

Second … protecting the First Amendment rights of all voters to cast votes that could not later be cancelled by the acts of others was a primary concern.

Of course, we're not talking about casting votes, we're talking about spending lots of money to influence an elections results. Dumb, or just deceptive? Dumb, and you'll see why in her next point that actually argues against her arguments.

And we've seen how equal that makes our politicians and disbarred judges. Justice Roggensack then artfully defends her vote to except as much help through big monied interests by somehow defending the guy who spends nothing. Roggensack turns logic upside down.

I voted for the rule because of my concern that the citizens who elected justices were in danger of having their votes … cancelled, solely due to another person's lawful contribution. Let me explain - if a person made a lawful campaign contribution and that caused the justice to be disqualified from deciding legal issues presented to the court, all of the other voters who chose that justice because they believed he or she was fair, independent and knowledgeable about the law would have their votes cancelled because of the justice's disqualification.

WRONG! That's called recusal. Of course voters would feel JUST THE OPPOSITE of Roggensack's claim, knowing that the APPEARANCE of impropriety and influence would require a recusal and be the professional thing to do.

Furthermore, a campaign contribution could easily be used as a sword by someone who wanted to disqualify a justice.

That doesn't happen now? Welcome to our world, the one in which voters watch on the sidelines as politicians and justices take the side of big business, special interests and their lobbies.

The rule that the court adopted addressed the concern … Making the politically-correct decision in tough cases would be the easier choice....

Roggensack looks at recusal due to the appearance of influence as political correctness.

Obviously, Roggensack can't be trusted to make another legal opinion. It's time for her removal.
Posted by John Peterson, Democurmudgeon at 12/18/2009 10:26:00 AM