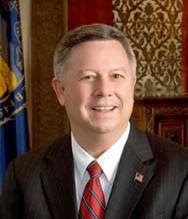 Do you want to know how snake like the Republicans are, and how easily they will throw Americans under the bus, for shear ideology? Take a quick look at Nebraska Republican governor Dave Heineman's reaction to the federal governments gift of full funding for the states Medicaid program, forever.

(AP) - It was the concern of Nebraska's Republican governor over expanded Medicaid costs in the proposed Senate health care overhaul bill that led to a compromise to cover his state's estimated $45 million share over a decade, U.S. Sen. Ben Nelson said Sunday.

Gov. Dave Heineman "contacted me and he said this is another unfunded federal mandate and it's going to stress the state budget, and I agreed with him," said Sen. Ben Nelson, But even if you try to do everything you can to help, Republicans will spit in your face: But Heineman expressed anything but gratitude, saying he had nothing to do with the compromise and calling the overhaul bill "bad news for Nebraska and bad news for America." "Nebraskans did not ask for a special deal, only a fair deal," Heineman said in a statement Sunday.

In response, Nelson fired off a letter Sunday to Heineman saying he's prepared to ask that the provision covering Nebraska's Medicaid share "be removed from the amendment in conference, if it is your desire."

In an Omaha rally Sunday hastily thrown together by a group called Americans for Prosperity of Nebraska … Rallygoers often shouted "Recall!" and "Liar!" at the mention of Nelson's name, and Huckabee himself seemed to compare Nelson to Judas in the biblical story of Jesus' betrayal.

And so it goes with health care for all, "bad news for America," and a disconnected inhumane party of gravediggers waiting for the sick and the weak to die. When it comes to preventing human suffering, it's no "deal."
Posted by John Peterson, Democurmudgeon at 12/20/2009 11:47:00 PM