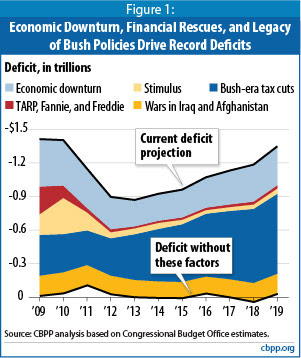 To the right, I've included the actual numbers that show who created the huge deficits we now hear the Republicans whining about. A bit convienent, wouldn't you say. It's possible no one will notice.

Jobs a Big Problem: How did we get here?
Thinkprogress.org: Congressman David Obey, D-Wausau, used his chairmanship of the House Appropriations Committee to craft an economic stimulus bill that might have averted the sharp rise in unemployment, which was the year’s most unsettling domestic development. Unfortunately, Obey’s good work was undermined in the Senate, where Majority Leader Harry Reid, D-Nev., bartered away $300 billion in spending for job creation to pay for tax cuts for the wealthy favored by supposedly “moderate” Republicans.
During the stimulus debate centrist Democrats did the work of the Republicans by loading up tax cuts and removing the elements that created jobs. Still not one Republican voted for the bill. We are now in trouble, thanks to the fiscally conservative Democrats.
Fiscal conservatism collapsed Wall Street and crashed the global economy. It's a misnomer. Here's what happened:

On Jan. 29, the House passed a $819 stimulus plan without a single Republican vote … after a group of senators brokered a compromise (that) slashed important provisions from the House version -- including the elimination of $16 billion in funds for new school construction -- while adding tax credits that skewed toward the wealthy.
A Center for American Progress analysis found that it would have created 9 to 12 percent fewer jobs than the House plan, even while costing $16 billion more … the House and Senate ironed out differences in the bill …The final compromise has only $513 billion in spending, with $276 billion in tax breaks. Some of these tax breaks, such as the credit for new home buyers, are particularly non-stimulative … The compromise slashes aid to states to $44 billion, from the House's $80 billion … Congressional Black Caucus leaders also objected to the elimination of $4.2 billion in neighborhood stabilization funding removed by the Senate and asked for funding to provide broadband Internet access to poor communities and to create more job training programs.

Isn't it time we vilify the term fiscal conservative, defining it as something that means economically clueless?
Posted by John Peterson, Democurmudgeon at 12/30/2009 05:21:00 PM