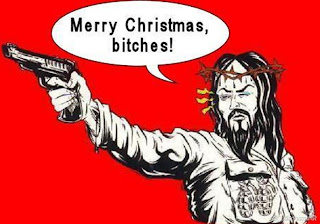 The Huffington Post is pointing out another major inconsistency coming from the anti-government conservative authoritarian movement. They say one thing, but do the other. Now what they're about to do in California is similar to the tax cutting, small government Republican Party's last 14 years of congressional control, where we saw big spending along with big deficits.

The Tea Party movement is supposed to be all about keeping the government out of your business. But if some California members get their way, the state will force public schoolchildren to sing Christmas carols. It's called the "Freedom to Present Christmas Music in Public School Classrooms or Assemblies" initiative. Merry Hyatt, a substitute teacher and member of the Redding Tea Party Patriots, is behind the push. The Record Searchlight reports:

The initiative would require schools to provide children the opportunity to listen to or perform Christmas carols, and would subject the schools to litigation if the rule isn't followed.

Parents are allowed to have their students opt out of the caroling if they express that desire in advance. "We were having Christmas without Jesus," Hyatt complained of her previous school district.

The initiative has the support of the local Tea Party Patriots president. "Bottom line is Christmas is about Christmas," said Erin Ryan, president of the Redding Tea Party Patriots. "That's why we have it. It's not about winter solstice or Kwanzaa. It's like, 'Wow you guys, it's called Christmas for a reason.' "

So much for limited government?