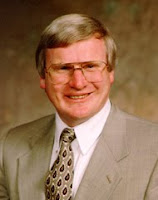 Don't you just love the party that hates government. Oh, except when expanding government advances something they want.

It looks like Mr. "small government" Republican State Senator Glenn Grothman has had enough, when it comes to the inconvenience of mom nature dumping 15" of snow on our city streets, complicating his path to the capital building. The Wisconsin State Journal:

Glenn Grothman … (said) Madison officials are endangering citizens' access to their state government and university … he's drafting a bill that would strip the city's ability to set policies for salting and plowing its main roads and give that authority to the state Department of Transportation. Only Madison, which Grothman claims is worse at clearing streets than other state cities, would be affected by the proposal.

"This is what happens when you have a city with politicians whose base is people who walk to their job at the co-op. They become incapable of handling their responsibilities to the state as a whole," Grothman said. "I'm exaggerating a little bit, but you know what I mean."

Glenn's just kidding, a little bit, when he uses a time worn cliché to portray a perennially top ten best city in America as a place so poorly run it needs his help. What was unfortunate was the typically serious liberal response that legitimized such a ridiculous proposal:

Mario Mendoza, aide to Madison Mayor Dave Cieslewicz, said "It's an issue that the city is already working on and there is no need for the measure called for by Senator Grothman,"

Blah, blah, blah...Would it surprise anyone that the issue involves the environment? Evil overlord Mother Nature, and her band of "enemy combatant" liberals, are fighting the Republicans over global warming.

City officials have said the policy is aimed at balancing keeping roads safe and holding down salt levels in area lakes and drinking water. But Grothman, a conservative who often favors local control, said that approach was so irresponsible the city should be stripped of its authority.

Saving the lakes and preserving our ability to drink water is irresponsible? West Bend voters must be proud of their knuckle dragging senator.
Posted by John Peterson, Democurmudgeon at 12/30/2009 10:28:00 AM