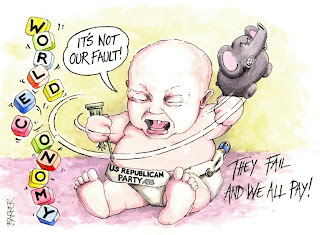 The following is so "not funny" it's funny.

Suddenly, Republicans are now super duper sensitive about how their elected politician votes on specific legislation. Never before have I seen such concern over reform and bill writing. In fact one guy is demanding CRAZY NEW RULES, like in this letter to the editor, from a minority party loser. Again, isn't it odd this voter was so silent while Republicans were spending like drunken sailors on unfunded tax cuts, bills passed in the middle of the night and Medicare Part D:

I do not believe that Sen. Russ Feingold and Sen. Herb Kohl have the support of their constituency for current health care legislation. They should provide the following:

Hard data which reflect state opinion on the matter and at least 75 percent general support of their vote. State residents expect accountability and the senators should not vote on this legislation without our approval. They vote on behalf of us, not for us. They should provide a statement that says they have listened to us and voted how we have decided. If they cannot do this, they have no business voting on this legislation.

All this from a Republican voter that wants to strip accountability from private businesses with tort reform, who wants strip the majority elected president and the party in power to legislate without an impossible 75% SUPER MAJORITY and dosen't like making tough decisions.