Banks are Killing businesses and job creation with credit card fees. Where are the Republicans Now? 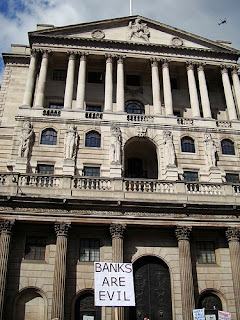 To Republicans, business taxes are killing jobs and businesses. But you won't hear them talk about reigning in banking credit card fees which are forcing higher consumer prices and discouraging job creation. It's caveman politics, where "government bad" and "private bank profits good." Capital Times:

Each time a consumer uses a credit card, 2 to 3 percent goes directly to the credit card company, which squeezes the margins on retailers and raises the price on consumers.

Since 2001, interchange fee costs have risen by over 300 percent, according to Bob Johnson, president of Consumers for Competitive Choice, far outpacing increases in health care or energy costs. He said the credit card companies and their issuing banks collected $48 billion in those fees last year.

"Every dollar spent on interchange fees is a dollar not spent hiring workers or providing savings to customers," Johnson says.

Hey, those are the same reasons Republicans give for doing away with the business tax. If it's that big a deal to spur on job growth, why not get tough on banks? A job killer is a job killer, right?

The problem, merchants and Johnson say, is not that the fees exist. It’s that they have gone up, that they vary depending on what card is used and that the fees are unregulated.

“It works as a hidden tax on consumers and businesses,” Johnson said.