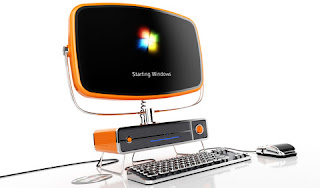 I couldn't help but pass along two unique designs that could make computer ownership fun. That's right, just owning a PC can make your day, especially if you're into the ceremony of mindlessly sitting in front of one.
This is one of those times you won't want to pass up watching the video. First, the Rolltop PC:

If you liked the look of those really old space age TV designs, you'll want one pictured above right:
NY Times: Dave Schultze isn’t a retro kind of guy, and in fact his rendering of a 1950s-era Philco Predicta television into a Windows computer — all sparkling orange and chrome and black — might be too futuristic for some. To me, it’s the most stunning computer design since Apple introduced The Cube.
There is no physical model of the Philco PC, “and I designed it with no client, no deadline, no budget,” said Mr. Schultze, who runs the industrial-design firm SchultzeWorks, based in Pasadena, Calif. And while he said he’s received tons of response since a photo of the computer-generated image hit the Web, “there’s no calls yet from manufacturers, although I do have some leads.”
Posted by John Peterson, Democurmudgeon at 12/19/2009 01:54:00 PM