Goodbye TV and News for the Not so Wealthy People, Like Us. 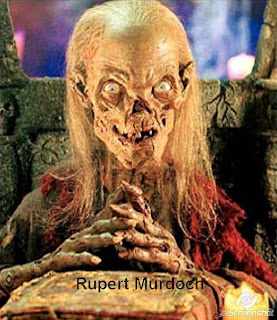 Pretty soon the information highway will have tolls at every turn, keeping news at arms length if you don't have the means to pay for it. Conservative greed meister Rupert Murdoch's empire is big enough now to demand outrageous prices for his TV programming.

Some think it's a liberal conspiracy to take Fox News off their cable systems, oblivious to the fact that they're going to be seeing big price increases in their cable bills soon. Worse still, those who don't watch Faux News will be paying Murdoch too, so he can churn out more of his media slime. The Capital Times:

Rupert Murdoch's News Corp wants cable companies to pay … (and) is threatening to remove its Fox stations from Time Warner Cable systems at the end of this week if the cable company does not agree to pay sizable subscriber fees of about $1 a month for each subscriber, potentially setting a precedent for broadcasters that are seeking a new revenue stream to offset advertising declines.

Time Warner, in turn, is playing hardball, running an advertising campaign to prepare viewers for the prospect of a January without college bowl games or "American Idol."

It pains me to think my money will help Murdoch's propaganda channel vilify me and half the nations citizens left of center, all the while opening the door for every other network to jack their subscriber fees through the roof.

After hearing the news that AT&T is hiking their monthly rates for TV, phone and Internet, why aren't the tea partiers screaming their heads off over the eventual loss of their freedom to be informed and keep more of their money?
Posted by John Peterson, Democurmudgeon at 12/31/2009 01:05:00 AM