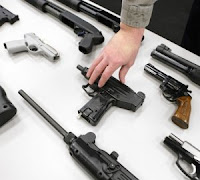 I've been saying for a long time that statistics need to be gathered regarding gun crimes committed by concealed carry license owners. The following story from Opposing Views, "Virginia Tech Shooting Survivor-"Keep Guns Off Campus" by John Woods says it all:
"I am a representative in Student Government at The University of Texas at Austin.

I'm also uniquely positioned to discuss the issue of firearms and classrooms as an alumnus of Virginia Tech: I was there in 2007 when the shooting happened, and I lost the girl I love. I feel obligated to address some of the misconceptions around the push for gun-free schools. Firstly, there is a suggestion that "Virginia Tech could have been prevented if only people were armed." Interestingly, none of the survivors think so. They describe utter chaos. At one point, my friend Colin thought he was being rescued by a police officer (all he could see from where he was hiding were shoes). Then he was shot four times.

According to the detectives, Maxine -- the girl I mentioned, who died in German class -- never saw the shooter come in. What good would a gun have done her? Virginia Tech police officers also told Colin that had they seen someone else with a gun, they would have fired immediately … it enables emergency medical technicians to get to victims more quickly.

Not all concealed handgun permit holders are responsible. The shooter at Fort Hood was licensed to carry a concealed weapon, as were four other mass shooters in the last year. Every time statistics emerge that the NRA dislikes, the NRA pushes for legislative changes that obscure such statistics under the guise of "privacy." In most states, there is no way to determine what percentage of violent crimes are committed by concealed carry permit holders."
Posted by John Peterson, Democurmudgeon at 12/09/2009 09:56:00 PM