UnitedHealth Group got a lot of attention when they said they might be dropping out of the ObamaCare exchanges. It looks like they want more attention.

You have to ask why anybody cares about United Health, since they only have a 5.5% involvement in the exchanges, and didn't participate much in the individual market prior to the ACA, which is what ObamaCare replaced.

Also, let's get something straight first; Democrats are missing the chance of a lifetime. They should be using the GOP criticism of the ACA exchanges - the co-pays and high deductibles, insurers dropping out or going broke - as ammunition to argue against our broken for profit insurance based health care system.

Enrolling healthy people beats paying for Sick People: You've got to check out the following outrageous comment from UnitedHealth Groups CEO Stephen Hemsley, who was paid $66 million in 2014, money he got from jacked up premiums and rejected sick people. Again, $66 million in one year, $45 million in stock options...and people can't afford monthly premiums. And conservatives whine that a hike in the minimum wage will increase the price of a burger? Where do they think Hemsley gets his money? Finance Yahoo: 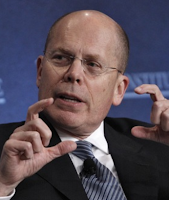 UnitedHealth CEO Stephen Hemsley said that his company had kept costs down by selling plans with small doctor networks and pricing the plans competitively. UnitedHealth generally enrolled consumers with better health than the overall exchange population but it still lost money, he said.

The point is, insurers have nothing to do with providing health care, they just take your money. And Hemsley is really not happy with people actually using the policies they can barely pay for:

Under the terms of the Affordable Care Act, insurance companies cannot deny coverage to anyone, including those with pre-existing health care problems. Hemsley said that many insurers have complained that some customers are making frequent use of their policies, which had contributed to losses.

UnitedHealth holds a relatively small part of the overall Obamacare market … sold health insurance plans to just 5.5 percent of the approximately 10 million Americans who use Obamacare … “It’s still important to remember that while United is a very big insurer, they have never been a major player in the individual insurance market,” Kaiser Family Foundation Senior Vice President Larry Levitt said. “The individual market has always been dominated by Blue Cross Blue Shield plans.”