As much as I hated big parts of the omnibus budget plan, the fact that it got a lot of things out of the way during an election year is a good thing; it's pissing off conservatives nationwide. Yup, Tea Party Republicans might end up doing what Democratic challengers in Wisconsin haven't been able to do; defeat Ryan.

All patriot’s should contact your groups leaders and begin organizing nationwide to put down this RINO in order that he is not re-elected to his seat in Wisconsin. The Badger State patriots need to begin soliciting your State Senators, high-profile business leaders or the State Legislators who reside within the 1st District of Wisconsin.

Apparently nobody in the 1st District has announced any intention of forcing Ryan into a primary, but it is time to locate someone willing to do this who might actually have a chance (with enough grassroots support) at defeating our newest RINO-Speaker. America doesn’t need another John Boehner but that is apparently what we now have as Speaker of the House. 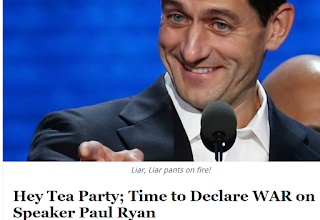 A facebook page was set up to primary Paul Ryan from Congress.

There is also a Fire Paul Ryan webpage set up online.