Ryan's big gift to Big Oil will cost consumers at the pump.

It's not unexpected to see the Republican Party, foot servants to Big Oil, hand their favorite deep pocketed lobbyists another big win, all at the expense of the American driving public: 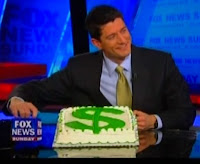 AP: Congressional leaders and the White House have reached agreement on a massive year-end tax and spending package ... An end to the ban on U.S. crude oil exports ... Lifting the decades-old export ban has been a top energy priority for Republicans for more than a year ... the liberalisation of exports will help companies producing in the US by enabling them to find the most profitable markets for their oil.

But that's going to raise the price of gasoline. The "abundant" supply of U.S. oil will disappear, costing consumers more in the long run:

Sen. Tom Carper (D-Del.) is throwing another proposal into the mix with his idea that certain oil refiners — who are likely to see reduced profits if oil exports are allowed and domestic prices increase as a result — should get tax credits in the deal.