My conservative friend in Milwaukee loves tell me after every one of these mass shootings that "Democrats immediately try to exploit the situation by trying to take away our guns."

I asked him; after a car accident, would you choose to talk about football, a good place to eat or the car accident?

Why is it so hard to understand: background checks and other reasonable gun laws don't take peoples guns away. The other day I was listening to Free Talk Live, a laughably naive and clueless libertarian style radio show, where they concluded everyone one should be able to get a gun no matter what their record, because the Second Amendment, as seen by our activist conservative Justices, clearly says that.

Now that these ivory tower justices have armed paranoid Americans with their radical interpretation, they can just sit back and watch the social carnage unfold. And it is!

One major voice in the conservative movement to shoot everyone considered a soft target, Erick Erickson set the tone for the discussion: 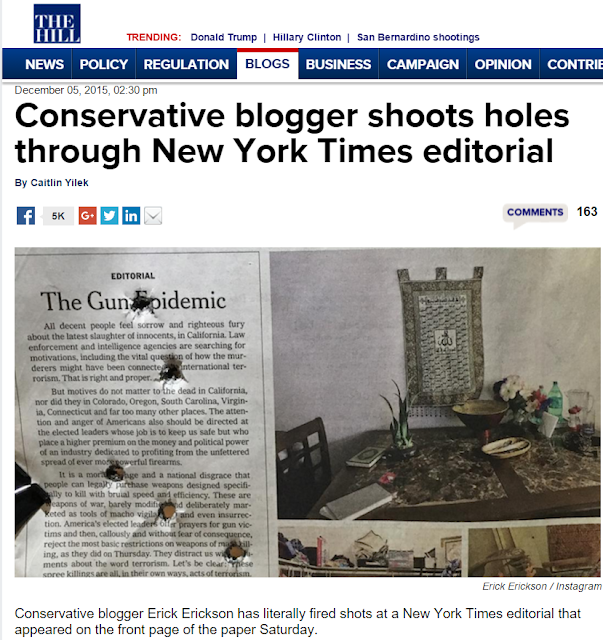 “This is what I think of the New York Times editorial today,” Erickson posted on Instagram, with a photo of bulletholes through the editorial on gun laws.

“The United States suffered it worst terrorist attacks since September 11 and the New York Times’ response it that all law-abiding citizens need their guns taken away,” Erickson added. “Screw them.”

Anyone want to rent Idiocracy? Check this out from Alternet:


The attacks—from a former GOP congressman taunting the U.S. Attorney General Loretta Lynch to arrest him after threatening American Muslims on air, to RedState.com encouraging people to shoot the Saturday edition of The New York Times for its editorial calling for a ban on all militarized weapons and to post that image online—are the tip of this latest rage-filled response. Ex-New York Gov. George Pataki, a going-nowhere GOP 2016 candidate, also calledfor “war on radical Islam” and taunted Lynch. Fox News is berating moderate Muslims to “fix this,” while other right-wingers mock their spokesmen.