The terrorist attack in California was all the Republicans needed to run off the cliff, and flip into panicky chaos. I put together the following recent comments that are without a doubt lunatics rantings.

Still not over the top enough for you? Try this Cruz ad:

Democrats and the news media continue to play along right wing crazy talk declaring that nothing can be done, killers will be killers, people will still get guns, and background checks aren't 100% perfect. That's leadership? What it tells me is that these freeloading Republicans are using the term "small government" as a convenient excuse to do nothing. 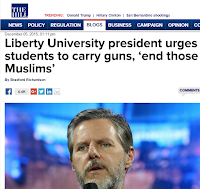 Don't be surprised when they use the same line to deal with everything from environmental protection to health care, feeding the idea that regulation is a waste of time.

But the talk of having an armed citizens police force is also based on a flawed premise. I remember the panicky call from my conservative friend in Milwaukee after he saw the lunkheads in his concealed carry class.

The following video report exposes how bad gun owners will be with their weapons, even after police training. And without the retraining that builds "muscle memory" (that overtakes and controls the shaking and adrenaline rush), gun owners revert back to their untrained state. From 2010: 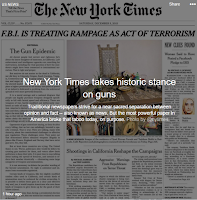 The controlled study documented in these videos show that concealed carry permit holders are fooling themselves if they think they will be able to react effectively to armed aggressors. Most CCW holders won't even be able to un-holster their gun. They will more likely be killed themselves or kill innocent bystanders than stop the aggressor. For more details, see "Unintended Consequences: Pro-Handgun Experts Prove That Handguns Are a Dangerous Choice for Self-Defense." CCW permit holders don't protect innocent people. They kill them. http://www.vpc.org/studies/unincont.htm.`