I guess it’s all in how you look at criticism.

Scott Walker and every Republican in the legislature represents the uber-conservative wing of the party, the activists who will go to any length to pass their agenda. The voters are sadly starting to catch up.

Framing the Criticism: Criticism, to Walker and like-minded conservatives, is always coming from their “opponents.” Claiming the mantle of infallibility is never a good starting point in a multi-party system of government.

So here's how Walker started off his recent JS commentary: 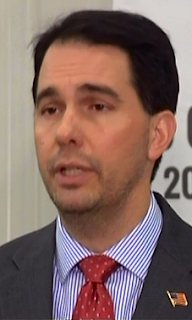 Many of our political opponents seem to be frustrated with the positive progress being made in our state (see Rep. Daniel Riemer's Dec. 10 column ). Thankfully, the facts point to a true comeback story.

A true comeback? Only if you believe the middle-class is doing just fine.

Middle-class taxpayers are better off in Wisconsin today than we were five years ago.

Same script, same lie. And because Wisconsin has always been near the middle or back end of job creation, it's reasonable to assume the low unemployment rate would have happened anyway, thanks to an improving economy. But Walker will take full credit anyway.


Walker: "Property taxes are lower on a median-valued home than they were five years ago — Income taxes are also lower..."

And what did we give up for that? We defunded our parks, dramatically defunded the UW, made some of the biggest cuts to K-12 in the nation, defunded the DNR, and won't fund transportation for road building/repair. The fact that the state didn't collapse right away means its working. High bar, huh?

Voucher Disaster Alert: Achievement Gap worst in nation: After 25 years of vouchers, promoted as a way to help minorities escape their failing schools, our achievement gap is now the worst in the nation. But vouchers are set to expand anyway. Forget the achievement gap, just focus on the overall state scores, which are still impressive:

Well, sure, that's because the state is still using Common Core, which is about to come to an end, and vouchers hasn't completely defunded our public schools yet...but that's coming too.

Frozen Tuition's won't be for long: Set to expire in 2017, Walker's artificially frozen tuition gimmick will result in huge future increases. I mean really, get serious:

Walker: "For the first time in University of Wisconsin history, in-state tuition is frozen at all UW campuses for four years in a row. That makes college more affordable for our students and working families."

And don't get me started on Walker's costly mistake not taking Medicaid expansion, and his liberal use of taxpayer money to pay off the hospitals treating the uninsured who now can't afford health insurance due to co-pays and deductibles:


Walker: "During my time as governor, we eliminated the waiting list for Medicaid access to health care for people living in poverty and helped those above poverty transition into the workplace."