The party of sociopaths? That would explain how Republicans could so easily ignore the horror of the Newtown massacre, and every other mass shooting since. Their callous indifference should have been a major tip-off.

The GOP presidential debate solidified that point in the most brutal way when the blood thirsty crowd supported of the idea expressed in the headline story pictured to the right by Sam Stein.

Make no mistake, this really is the path Republicans want to take us down, as a nation.


Donald Trump: “We have to be much tougher, we have to be much stronger than we've been. We have people that know what is going on … I would be very, very firm with families. And frankly, that will make people think, because they may not care much about their lives. But they do care, believe it or not, about their families' lives.”

Dr. Ben Carson: “You have to be able to look at the big picture and understand that it's actually merciful if you go ahead and finish the job rather than death by a thousand pricks.”

When co-moderator Hugh Hewitt, no shrinking violet when it comes to conservatism, asked Carson if he was “OK with the deaths of thousands of innocents children and civilians,” the crowd mercilessly booed.

How long will it be before Republicans rationalize going after other perceived enemies, like the Democrats? Isn't it time they took their country back? Like Jeb said:


"The idea that that is a solution to this, is just...is just crazy!"

Here's a string of tweets during the debate: 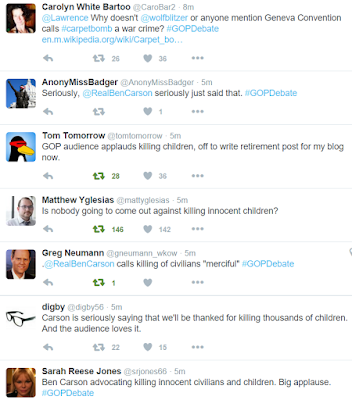