Like everything else Wisconsin had going for it, the great outdoors is getting the Scott Walker once over. Tourism, hunting and fishing seem like a second thoughts to Scott Walker and Republican legislators seeking to slash government deregulation.

It's gotten so bad that opponents had no choice but go to the EPA for help, sounding the alarm:

WPR: A group of former and retired DNR employees are urging the EPA to make the state step up its regulation of water pollution … requested that federal regulators force the DNR to improve its enforcement of the Clean Water Act. Retired DNR employee Ron Grasshoff: "I just saw an erosion and a trend of the DNR straying away from its original mission, which is to protect the air, water and soils of the state.”

We have to force the DNR to do their job? Only in Walker's Wisconsin have we seen this kind of destruction...:

The letter cites cuts in science budgets, orders to cease discussion of climate change, and gag orders on employees as some of the most serious problems with the DNR … cut upwards of 600 positions … Enforcement by the DNR has also declined, and in some cases, the agency has said it lacks legal authority to carry out that responsibility.

But Walker responded with perhaps one of the most ridiculous and convoluted reasons ever uttered by a state governor. Again, there's never a good outcome when Republicans try to "balance" the environment with making money. WPR


"The fact that citations have gone down is a good thing because in this state, we believe that if a citation is issued, that's a sign that something went wrong. So, just because the number of citations have gone down isn't a reflection of the quality in terms of water, air and land," he said ... be more proactive in working with would-be violators ... (saying) his ultimate goal is to have no citations issued at all.

No citations at all because...we have reached environmental perfection, or just given up? Walker is now about to give polluters more time to clean things up: 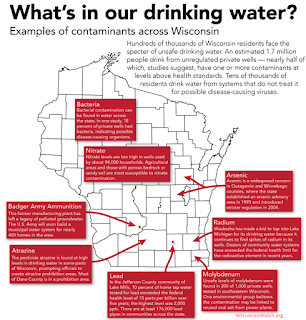 A hearing will look at a proposal to give industries and municipalities more time to reduce phosphorus discharges into Wisconsin waterways ... the Multi-discharger Phosphorus Variance!

However, attorney Elizabeth Wheeler, of Clean Wisconsin, contends a state review of the plan inflates the cost of upgrading treatment plants and leaves out the potential financial benefits to shoreline property owners. "You don't want that waterbody to be polluted with toxic algae, you want to be able to enjoy it, and swim in it and fish in it, and so there is that direct economic value," she said. Wheeler also said local tourism-related businesses gain when companies and cities reduce phosphorus pollution.