Rep. Paul Ryan has done so little to help labor and business in Wisconsin, it’s almost stunning. As House speaker, Ryan is taking that attitude nationwide.

Even my conservative friend in Milwaukee alerted me to this story via his most reliable news source, Breitbart. It wasn’t as badly written as almost everything else is there, but still, I’m ready to go with The Hill’s story first:

The $1.1 trillion omnibus bill includes language that would dramatically increase the number of visas available for foreign workers … The provision could more than triple the number of H-2B visas for foreign workers seeking jobs at hotels, theme parks, ski resorts, golf courses, landscaping businesses, restaurants and bars … intended to boost the supply of non-agricultural seasonal workers.

I can see a need for agricultural labor, that's always been an issue, but this is ridiculous. The changes were spread out and almost unnoticeable in the 2,000-page budget (see pictures).

And after getting caught undermining American labor, surprise, it wasn't exactly Paul Ryan’s fault. Hey, he never did promise to protect American workers specifically. He just promised not to provide a path to citizenship. Come on, you knew that right? 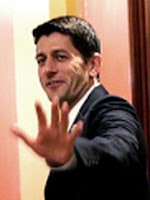 A House GOP aide said the visa provision was written by the Judiciary Committee, and that the Speaker was not involved. The aide added that Ryan did not pledge that he wouldn’t touch any programs related to immigration.

Ryan's a true leader. But the bills threat to labor is real, no matter how fast Ryan backs away from taking responsibility. Oh, and he’s not exactly promising to immediately change the provisions either.

Even Republican Sen. Jeff Sessions blasted the attack on labor. Pinch me I must be dreaming:


“These foreign workers are brought in exclusively to fill blue collar non-farm jobs in hotels, restaurants, construction, truck driving, and many other occupations sought by millions of Americans. The GOP-led Congress is about to deliver Obama a four-fold increase to one of the most controversial foreign worker programs. The result? Higher unemployment and lower wages for Americans.” Sessions estimates the number of H-2B visas will soar from 66,000 to 250,000 because of the language in the omnibus.

NumbersUSA, a group that advocates for reduced legal immigration levels, criticized Speaker Paul Ryan (R-Wis.) for allowing the provision into the omnibus after pledging to look out for American workers. “H-2B visas are for low-skilled foreign workers who typically compete with people who have a high school diploma or less and these are the people who are struggling the most. These are the people that Ryan seemed to be referencing in his speech and yet he sneaks in a provision in the omnibus that’s going to quadruple the number of low-skilled foreign worker visas.”


Ryan is also going after prevailing wages, like his old friend Scott Walker did in Wisconsin, leaving that decision up for corporate abuse. Here's that section of the bill: 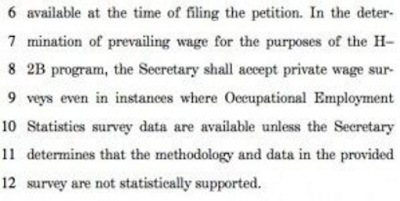 So much for "Ryan calling on Congress to look after working-class families."