I was literally yelling at the TV. The kids came into the room to see what got dad all worked up. And don't get me started on the play by play guys comments, that didn't make things any easier. Steve Young's passionate plea for saving the game of football was the one bright spot.

But, taking a different angle completely, we're now hearing from the Lingerie Football League. They're saying the refs are were so bad, their own league booted a few crews for incompetence.

Fans may be asking, how did this ever happen:


Fox6: The final decision is only going to fuel debate about the replacement officials coming off a weekend filled with disputed calls.

“Don’t ask me a question about the officials,” Green Bay coach Mike McCarthy said. “I’ve never seen anything like that in all my years in football. I know it’s been a wild weekend in the NFL and I guess we’re part of it now.”

Here's Fox 6's coverage of the blown call between the Pack and Seahawks, resulting in a 14-12 win over Green Bay:


From a league I know little about, but hope to see sometime, comes this statement:

The Lingerie Football League released a statement late Monday night saying that it fired several officiating crews that are now working as replacement refs in the NFL. LFL Commissioner Mitchell Mortaza wrote that those crews were fired “due to … on-field incompetent officiating.” 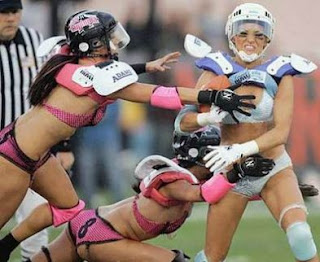 “Because of the LFL’s perception it is that much more critical for us to hire officiating crews that are competent, not only for the credibility of our game but to keep our athletes safer. Due to several on-field incompetent officiating we chose to part ways with with a couple crews which apparently are now officiating in the NFL. We have a lot of respect for our officials but we felt the officiating was not in line with our expectations. We have not made public comment to date because we felt it was not our place to do so. However in light of tonight’s event, we felt it was only fair that NFL fans knew the truth as to who are officiating these games.”