According to the State Journals On Politics: 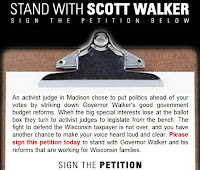 Gov. Scott Walker's campaign launched a petition drive on Thursday, urging people to show their support for his law limiting collective bargaining in the wake of a judge's decision striking it down as unconstitutional.

"An activist judge in Madison chose to put politics ahead of your votes by striking down Governor Walker's good government budget reforms," the online petition reads. "When the big special interests lose at the ballot box they turn to activist judges to legislate from the bench."

Campaign spokesman Tom Evenson said that anyone inside or outside of Wisconsin can sign it.

Oh great, another national campaign to keep Walker's name in the celebrity spotlight, ya think?

Look Dane County Circuit Judge Juan Colas struck down parts of Act 10 because the law violates the state and U.S. constitutional guarantees of free speech and freedom of association. The law also violates the Constitution's equal protection clause by creating separate classes of state workers who are treated differently and unequally under the law.

But that’s alright I guess, because a bunch of tea party "constitutional scholars," think a petition has any relevance at all.

Or is it just a way to gin up the base for the presidential elections?

Assembly Minority Leader Peter Barca, D-Kenosha, who called it "absolutely bizarre. The interpretation of the Constitution is not based on petitions," Barca said.