Again, has anyone on the right noticed Scott Walker is not succeeding? He's belly flopped big time, turned it into a positive, and incredibly got conservative voters to applaud his disastrous effort. He's the P.T. Barnum of governors, a master con and a droopy eyed showman.

The following look at Walker's record is a breath of fresh air: 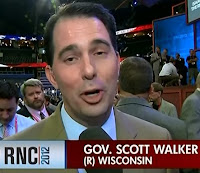 jsonline-James Rowen: The Journal Sentinel keeps a tally of jobs created in Wisconsin measured against Scott Walker's core promise in his 2010 election, and repeated in the 2012 recall runoff, that he would create 250,000 new jobs during four years in office.

Let's face it: the promise was cotton candy whipped up for political purposes, period. There was no expertise, no economics behind it, regardless of how many buzz-wordy news releases … about business tax breaks, new tools, more flexibility, jazzy, camera-ready cold calls to Illinois by Rebecca Kleefisch and "open for business" billboards installed at Wisconsin's borders.

Walker continued the artifice by re-creating the Department of Commerce as a public-private corporaton that was supposed to work faster and more efficiently and get more love from the private sector … but Paul Jadin, its first boss has already said he's leaving for a southern Wisconsin regional development agency post, and the feds are saying and documenting that his agency and Walker's coordinating Department of Administration have disregarded oversight responsibilities and squandered big money Big Government sent their way, the Wisconsin State Journal reports today.

…is there anyone - - especially anyone on the Right flying the Personal Responsibility flag - - who wants to argue on the substance that after nearly two years in office, Scott Walker can claim job-creating success by having hit just 11% of that 250,000-new-jobs'-pledge?