I love this idea, especially now, after hearing the yelps and screams of my young sons, as they ran in terror from a few flies in their room. Maybe now they put away their Nerf guns and help out around the house.

The gun shoots a pinch of salt from about 2 to 3 feet at the unsuspecting fly, killing it instantly. 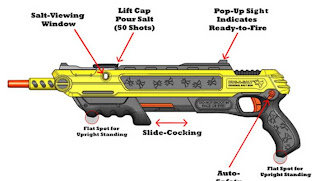 Core77: With nearly half a million dollars in funding and just under five days to go, Lorenzo Maggiore's BUG-A-SALT is on track to be IndieGoGo's most lucrative campaign ever. It's been making gizmo / gadget / public-interest-story rounds for over a month now, since it launched and quietly went viral to the delight of the blogosphere and the nearly 10,000 backers looking to take pest control into their own hands.

They make a reasonable argument for their choice to stick with a Chinese manufacturer:
As for making the product in China, we recognize that this is a hot button issue in these current times. We have and continue to investigate ways to possibly do some of the manufacturing here in the USA. It is very expensive to make them here and price them at any sort of realistic level that most people would buy them at.

That said, we have already created a few new jobs for people here in the USA and there are a host of other US based individuals and companies that have begun and will continue to generate income and profit from this project (bookkeepers, patent lawyers, fulfillment companies, contract employees/consultants, Indiegogo, Paypal and more). We are proud of that and it's only the beginning. Knock us if you want, but better yet, send us your ideas about how we can do it better (If your uncle/aunt owns a plastic injection mold business here in the USA and wants to put a bid in, have them call us). We dig the debate because we live, work and support the American Dream here as well.