From the Empty Chair Obama, to the Obama Straw man? Romney/Ryan Campaign Crashing.

The Romney/Ryan campaign has been so ugly and painfully out of touch, that their only option now is to get tea party crazy. They want us to think their obvious weaknesses were Obama’s weaknesses all the time. Oh, the president is a tricky one. 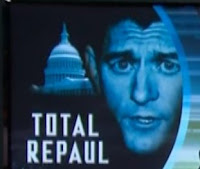 ABC: Paul Ryan unveiled an aggressive new argument against his opponent Friday accusing the president of a straw man strategy and “if anyone dares to point out the facts” of the president’s “record” then “they’re just being negative and pessimistic about the country. It’s classic Barack Obama straw man,” Ryan said at the Values Voters forum. “The new straw man is people hoping for the decline of America.”

That’s right, the Republican plan to undercut and sink the president by tanking the economy with a record number of filibusters and a no compromise agenda, was a “straw man” creation dreamed up by Obama.

Ryan said there is “not politician more skilled at striking heroic poses against imaginary adversaries.” “Nobody is better at rebuking nonexistent opinions,” Ryan said. “Barack Obama does this all the time, and in this campaign we are calling him on it.”

Really, its come to this?  Welcome Tea Party Ryan?

“When he tries to make big government sound reasonable and inclusive, President Obama likes to say, ‘We’re all in this together. And here, too, he has another handy straw man. We’re all in this together … it is not only true but obvious. Yet how hollow it sounds coming from a politician who has never once lifted a hand to defend the most helpless and innocent of all human beings, the child waiting to be born,” Ryan continued … He added that this administration “stands for an absolute, unqualified right to abortion - at any time, under any circumstances, and even at taxpayer expense.”

“When you get past all of the President’s straw men, what we believe is plain to state: These vital questions should be decided, not by the caprice of unelected judges, but by the conscience of the people and their elected representatives,” Ryan said to cheers. ” He was interrupted twice by protesters who were drowned out by chants of “U-S-A!” They were escorted out, the second one quite aggressively by the event’s security.

Ryan ended with an appeal to independents … “Whatever your political party, let’s come together for the sake of our country.  Let’s put these divisive years behind us.”