I love this story, too bad it was just a fictional account. Still, it could have happened. 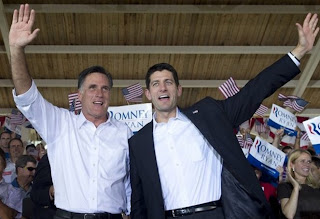 Michael Allen wrote: There are reports of a rift between Republican vice presidential nominee Rep. Paul Ryan and Presidential running mate Mitt Romney. According to some news reports, Rep. Ryan has nicknamed Romney “Stench,” while staffers on the Romney campaign refer to Rep. Ryan as “Gilligan,” reports RawStory.com.

Apparently, the nicknames started after the former political director of the Republican Party of Iowa, Craig Robinson, told the New York Times: “I hate to say this, but if Ryan wants to run for national office again, he’ll probably have to wash the stench of Romney off of him.”

Politico.com's Roger Simon reported that while Ryan “had already decided to distance himself from the floundering Romney campaign, he now feels totally uninhibited." Simon wrote that Rep. Ryan said: "If Stench calls, take a message" and "Tell Stench I’m having finger sandwiches with Peggy Noonan and will text him later.’”

Meanwhile, Romney senior campaign officials in Boston are calling Rep. Ryan “Gilligan" because he is seen as an intellectual lightweight.

I hope Ryan’s Democratic challenger Rob Zerban plays up that angle. Since the national spotlight focused on Ryan, we found out there’s no one home upstairs for this strict sure sounding ideologue.
Posted by John Peterson, Democurmudgeon at 9/27/2012 12:04:00 AM