Sen. Glenn Grothman is an unfiltered conservative voice, who honestly reflects his party’s position. In the press release below, not only is Grothman undermining our judicial system by bashing a decision he disagrees with, but he also thinks we should end our educational system so we can stop breeding “left-wing extremism” (the real reason for vouchers). Listen to Sly in the Mornings interview with Glenn here!! It'll blow your mind.

It can’t be overstated; we’re seeing a winner take all move toward an authoritarian one party system, discussed openly by politicians, and rabidly supported by Republican voters. There’s nothing to “decoded” anymore.

“The decision reached today by Dane County Judge Colas is further evidence of the complete abandonment of the rule of law in this state and country … Some judges today are rendering decisions one would expect from a banana republic dictatorship or newly independent country in which respect for the law has not been established. I also hope this serves as a clarion call to policymakers that we must no longer allow our education system to be a breeding ground for left-wing extremism.  It should be a particular embarrassment that Judge Colas is a product of the UW Law School, so is Judge Sumi who earlier tried to overturn Act 10.  Rather than wasting money on current diversity bureaucrats, we must guarantee intellectual diversity at the University of Wisconsin in general and the Law School in particular, so that some of their graduates have a respect for the separation of powers and the rule of law.”

Despite the Republican use of the courts pursuing cases like Citizens United and Obamacare, a few Democratic challenges will not be tolerated. Again, Grothman’s isn’t alone in pursuing a no-holds-barred hostile one party takeover of government.  Read the list of comments below in reaction to Judge Colas’ ruling, posted on radio talker Vicki Mckenna’s Facebook site. Scary stuff. 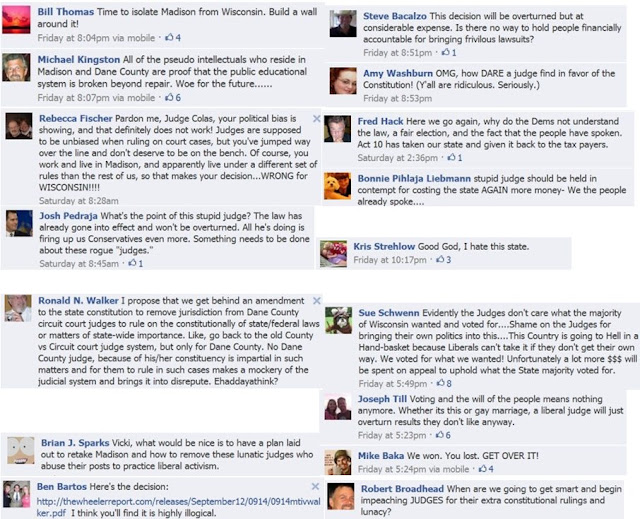 This shows how little respect they have for the Constitution, and how little they understand it.