And you thought the Walker Authority couldn't make things much worse? You wanted him back.

I thought to myself before I read the following story, Scott Walker isn’t going to…isn’t….
Yes, he is removing electrical safety requirements from our building codes. Wisconsin State Journal reporter George Hesselberg has the heads up: 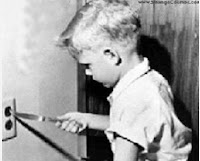 Mandatory requirements designed to detect fire-causing conditions, stop electric shocks and keep children from sticking foreign objects into electrical outlets have been targeted for removal from the state code, according to a governor-approved plan to rewrite the rules to administer the code.

Some electrical inspectors have already lined up against the proposal, which Gov. Scott Walker approved on June 29. The approval authorizes the state's Department of Safety and Professional Services to study the proposed changes, hold hearings and write new administrative rules.

Joe Jameson, electrical inspector for the city of Middleton and president of the South Western Wisconsin Electrical Inspectors Association, said his colleagues are baffled by the proposal, which would remove proven life- and property-saving requirements. "This proposal from the governor's office was not discussed by any of the state's safety councils or building code councils," said Jameson.

Get ready for it:

The new plan would make installation of those devices optional.

You can thank the homebuilder lobby for this brilliant idea:

The Wisconsin Homebuilders Association was one source for the code-changing plan, confirmed Jerry Deschane, association vice president. "We have talked to the department  … mostly because of reliability problems with all three of those devices," said Deschane.

But Jameson called the proposal "bizarre," saying the safety requirements add about $200 to a typical $200,000 home, and even the proposal notes the "economic impact is minimal."

AFCI, which has been required in Wisconsin since 2010 but is a national electrical code requirement, detects electrical arcs from cracked, broken or damaged electrical insulation and shuts off power to the circuit before the arcing leads to a fire, according to the Consumer Product Safety Commission. GFCI, common in construction for decades, protects people from shock, electrocution and thermal burns.

This normally would be a no brainer, yet business interests come before public safety, even death. Another words, there shouldn’t even be a discussion:

The Department of Safety and Professional Services said the proposal "came to our attention from builders from across the state. As we want to be responsive to concerns from our stakeholders, we are continuing to conduct research." The proposal estimates it will take 600 hours of staff time to develop the rules.

Scott Walker did say he was getting government out of the way, but like this?:

The governor's office said: "Governor Walker campaigned on getting government out of the way by ensuring that regulations are science-based and predictable. The change to this rule simply reflects concerns that were raised to DSPS by individuals who construct homes. Instead of mandating the use of these products, this rule change would make it optional."

Madison city electrical inspector supervisor George Hank said he was "somewhat surprised, as these are life-safety devices. These are small prices to pay for additional safety."

According to the National Electric Manufacturers Association, AFCIs are required in all states except Indiana. "Our groups are trying to contact anyone who will listen about this because we think this is ridiculous and a step backward," said Jameson.

Reliability problems?  Deschane was critical of the AFCI, GFCI and tamper-proof outlets because "some electricians have been talking to us about reliability problems." A home security system or a sump pump, for example, can trip an interrupter … And the tamper-resistant outlets, which use small plastic covers over the prong openings that are moved aside cause problems for "some people who have trouble putting plugs in those sockets." He knew of no tests or statistics or reports that support those claims, but "the concerns we have raised come from complaints from people who have been installing (the devices) in Wisconsin."

Ed Ruckriegel. Madison Fire Department's fire marshal, said he saw no reason for removing the standards, which he said reduce injuries, save lives and prevent fires. "If this goes before committees for hearings, I am sure you will see many folks in fire department uniforms testifying against it," he said.