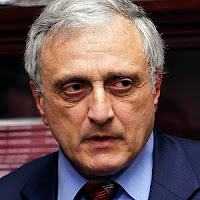 What does it say about a misnamed “grass roots” tea party movement funded and directed by billionaires backing up millionaire candidates who say their sticking up for the “little guy?” We’re one step away from a government ruled by one party, demanding we listen and do things their way, all the while adhering to the Christian/Judeo teachings spelled out in our Constitution.

NY Times: Carl P. Paladino, a Buffalo multimillionaire who jolted the Republican Party with his bluster and belligerence …(is) at the top of the party’s ticket

We’ve heard a lot about the media’s mischaracterization of the tea party movement. Yet while they appear to be a group of bigoted, racist advocates of a mythical reworking of the Constitution, they say it’s just not true. Yet Paladino is their guy, with a personality and agenda that says otherwise:

Paladino, 64, energized Tea Party advocates and social conservatives with white-hot rhetoric and a damn-the-establishment attitude … who has forwarded e-mails to friends containing racist jokes and pornographic images, espoused turning prisons into dormitories where welfare recipients could be given classes on hygiene, and defended an ally’s comparison of the Assembly speaker, Sheldon Silver, who is Jewish, to “an Antichrist or a Hitler.”

Mr. Paladino … roamed the state with a pit bull named Duke … platform calls for cutting taxes by 10 percent in six months, eliminating cherished public pensions for legislators, and using eminent domain to prevent the construction of a mosque and community center near ground zero.

Sounds like a bipartisan guy to me. Nothing says Constitution more than a government taking of private property. But at the same time, the Republican Party is allowed to do whatever it takes to win an election…

The victory capped a topsy-turvy race in which the Republican state chairman, Edward F. Cox, doubting Mr. Lazio’s chances, tried to recruit a Democrat to carry the party’s banner, but then found himself outflanked by an insurgent whom he and much of the party’s leadership had denounced.

But running Republicans as Democrats is as American as apple pie.