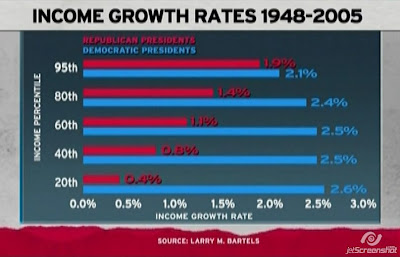 Rachel Maddow talks to Ezra Klein about the new income growth charts based on who's in power as president, a Republican or Democratic. Like the graph showing balanced budgets only under Democratic presidents, this one again proves the conservative free market fruit cakes are still wrong.
It'll be really hard for small government conservatives to defend a philosophy that lies about the economic freedoms and benefits that hard working Americans will see under their policies. It just ain't gonna happen. Klein knows the numbers...


Interesting to note from the Atlantic: